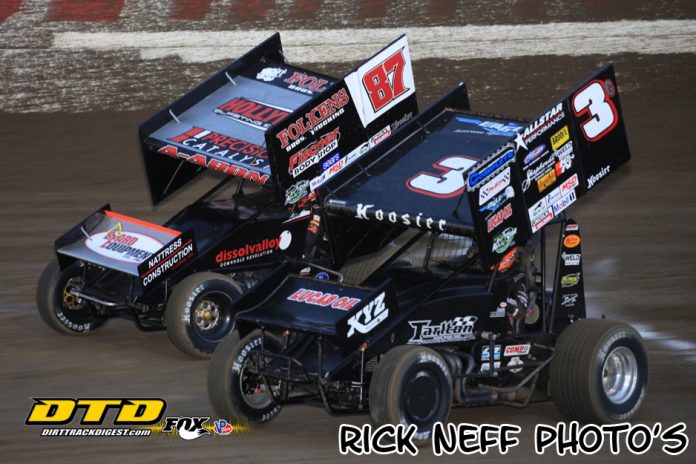 VERNON, NY – On August 17, Utica-Rome Speedway roars to life for a rare Friday night race night when Tony Stewart’s Arctic Cat All-Star Circuit of Champions Series for 410 Sprints comes to town, which will feature some of the best Sprint Car drivers in the country. Filling out the card on Wilber Duck Chevrolet night with the “Friday Night Dirt Double” will the 358-Modifieds for a special $2,000 to win event.

The 2018 season for the All-Stars has been a very competitive one so far, with one of the best traveling lineups in the series long and storied history. Currently, Aaron Reutzel of Clute TX leads the standings by just four points over California’s Carson Macedo. Chad Kemenah sits in third in the rankings followed by Jac Haudenschild, former NASCAR Cup driver Dave Blaney, Paul McMahan, Parker Price-Miller, Cale Conley, Brandon Spithaler, and Carl Bowser.

This past weekend at the 58th annual Knoxville Nationals, three All-Star regulars finished in the top 10 with Reutzel finishing in fourth, Macedo in sixth, and Kemenah in seventh. It was an emotion filled week for Macedo as he filled in for the late Jason Johnson in the family owned #41 for both the 360 and 410 portions of the Nationals. Macedo would win a preliminary A-Main before finishing second in the 360 Nationals, followed by his sixth place run in the Nationals a week later.

Gates will open at 4 p.m. with racing set to begin at 7 p.m. Adult admission for this huge show is $30 for adults with Seniors, Students, and Military admission set at $27. Grandstand admission for under 16 is $5 while pit admission is $35.

For more information on the Arctic Cat All-Star Circuit of Champions, please log on to www.allstarsprint.com. For information on the Utica-Rome Speedway, visit us at www.uticaromespeedway.com or find us on Facebook and Twitter. The speedway office can be contacted by calling (315)829-4557.