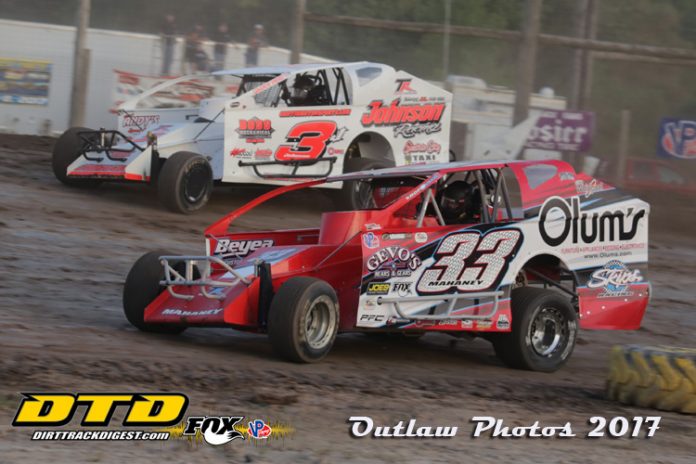 VERNON, NY- The half-mile oval at Utica-Rome Speedway roars back to life this Sunday, August 26, when Wilber-Duck Chevrolet presents a PICK 4 show featuring the DirtTrackDigest.com 358-Modifieds, Broedel Energy Sportsman, Ted’s Body Shop Pro Stocks, and Rookie Sportsman. With just two points races left on the schedule, a lot is at stake for several drivers looking to grab the championship in their respective divisions.

The chase for the DirtTrackDigest.com 358-Modified title is wide open at just 10 points separate the top five, and 60 points is the difference from first to 10th in the current standings. After his popular win on August 12th, Marc Johnson finds himself at the top of the standings for the first time this season by just four points over Billy Dunn, six over Pat Ward and Jeremy Wilder, and 10 over Bobby Varin. Rounding out the top 10 are Bobby Herrington, Rocky Warner, Jack Lehner, Billy Whittaker, and Lance Willix. With the points so tight, a lot of shuffling in the standings should be expected over the final two events.

By starting the final two events of the season, Matt Janczuk should just about clinch the 2018 Broedel Energy Sportsman championship, which would be his third consecutive in the 602 Sportsman and sixth overall. Behind him, positions will definitely change with just 50 points separating the remainder of the top 10. AJ Filbeck currently sits in second over Charlie Tibbits, Dave Moyer, Kyle Inman, Rocco Leone, Chris Cunningham, AJ Miller, Mark Effner, and Stephen Denton.

The Rookie Sportsman will be in competition as well for drivers looking to gain seat time with other drivers at their experience level.


All of our nightly events labeled PICK 4 will offer all fans a chance to win prizes throughout the racing program. Prizes include, but are not limited to, free passes for future shows, food vouchers for the concession stands, Utica-Rome Speedway gear and much more.

Adult admission for this exciting night of short track racing is set at just $13 for adults with Seniors, Students, and Military admitted for $10. Kids under 16 are FREE. Gates will open at 4:30 p.m. with racing slated to begin at 7 p.m.