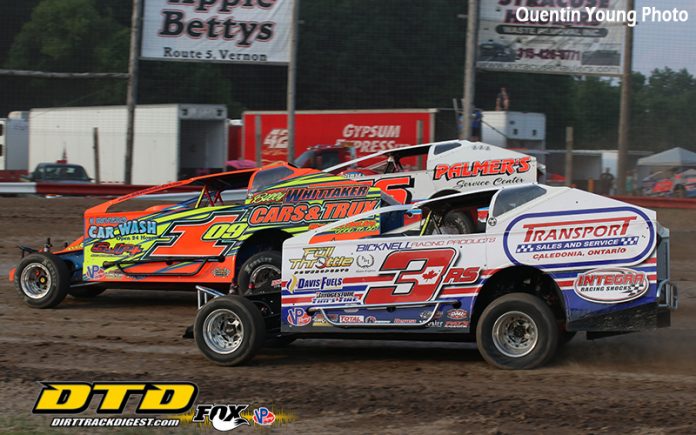 Brian Murphy and Billy Shantel Jr. led the DirtTrackDigest.com 358-Modified field to starter Scott Hixson’s green flag with Shantel getting the early edge and leading the opening lap. Fourth place starter Lance Willix immediately started to apply pressure, and on lap 10, Willix was able to slip by Shantel for the lead.

14th place starter Billy Dunn was on the charge early, breaking into the top five on lap five and into top three on lap eight. Dunn’s charge would continue as he drove by Shantel for the runner-up spot as lap 10 was being scored. A lap later, Dunn would make Willix’s turn at the front a short-lived one as he took over the lead in lap 11.

Dunn would dominate the remainder of the 30-lap event to score his second win of the season. Billy Whittaker and Rocky Warner would make late race passes to finish in second and third, with Willix and Bobby Herrington rounding out the top five. Marc Johnson and Pat Ward battled side by side all race long with Johnson edging Ward to finish sixth with Ward, Jeremy Wilder, Mike Mahaney, and Shantel filling out the top 10.

The Broedel Energy Sportsman 20-lap feature event saw outside pole sitter Taylor Lamb grab the early, and despite several early caution periods, Lamb would continue to show the quick way around the half-mile oval. On lap three, sixth place starter Dave Moyer moved into second and started to pressure the Lamb for the top spot, pulling along side Lamb on several occasions. A lap 17 caution would set up a three lap shootout, with Lamb holding on to the lead with two laps to go. Moyer finally made his bid for the lead stick as he took the lead with the field coming to the white flag. Moyer would hold on to win his first race in 2018 with Lamb, AJ Filbeck, Stephen Denton, Matt Janczuk, Dalton Rombough, Jeff Taylor, Rocco Leone, Kyle Inman, and Dylan Zacharias.

With a bold outside move, Shane Henderson took the led the opening lap of the 20-lap Ted’s Body Shop Pro Stock main event. Just a circuit later, third place starter Bill Knapp would slip underneath Henderson to be scored the leader on lap two. From that point on, Knapp held off the repeated challenges from Pete Stefanski and Henderson to grab the win, his first win in seven seasons at the Utica-Rome Speedway. Stefanski finished in second ahead of Henderson, Travis Welch, Mike Welch, Frank Hyatt, Kenny Gates, Jerry Streeter, Ernie Staelens, and Mike Kazlauskas.

The Open Sportsman made another visit to the Vernon oval, and on the opening lap, pole sitter Heath Carney would be scored the leader. Claude Hutchings Jr. would race by for the lead on the second lap and would never look back as the he took his second consecutive win. Jim Rothwell, Carney, Robbie Barker, and Craig Pritchard rounded out the top five positions.

Casey Cunningham led the first seven laps of the 15-lap Rookie Sportsman main event until Scott Mallette took over the lead on lap eight. Mallette would never relinquish the lead to take the win with Cunnngham and Alexis Jacobs chasing.

An exciting night of racing is scheduled for next Sunday, September 2, when Broedel Energy presents Championship Night. Track champions will be crowned in the DirtTrackDigest.com 358-Modifieds, Broedel Energy Sportsman, and Ted’s Body Shop Pro Stocks with the Lucas Oil Empire Super Sprints and Rookie Sportsman joining in the action. Gates will open at 3 p.m. with racing starting at 6 p.m. For more information, please log on to www.uticaromespeedway.com.