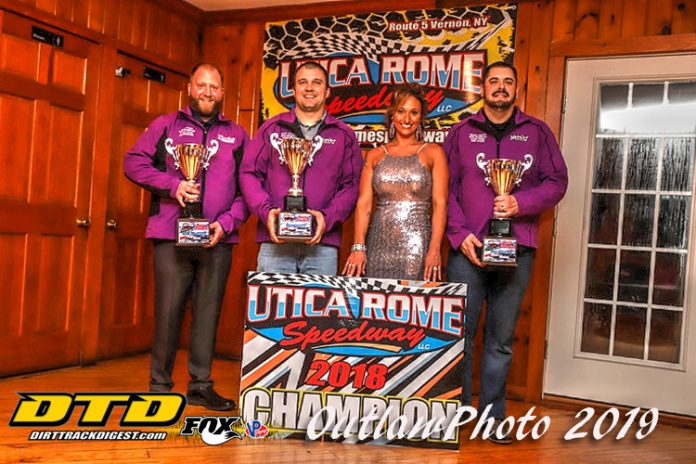 VERNON, NY – Friday night the 2018 season officially concluded for the Utica-Rome Speedway as the annual awards celebration took place at the Speedway Club. Billy Dunn, Matt Janczuk and Travis Welch were each honored for their accomplishments during the 2018 season in their respective divisions. Over $25,000 in cash and prizes was handed out during the evening festivities.

Dunn, of Watertown, N.Y., accepted the $5,000 top prize for his first career title at the facility in the DirtTrackDigest.com DIRTcar 358-Modfied division. Dunn captured the championship by a mere 10 points over Marc Johnson. Dunn captured two feature wins during the season while finishing in the top five in seven out of eight full point events. Behind Johnson, Pat Ward finished in third with Jeremy Wilder and Bobby Varin completing the top five in points. Bobby Herrington, Rocky Warner, Billy Whittaker, Jack Lehner and Lance Willix completed the top 10. Warner was also honored as the DIRTcar 358-Modified division Rookie of the Year.

Janczuk collected $1,000 for his third consecutive Broedel Fuel Group DIRTcar Sportsman championship. Janczuk was consistent as always as he never finished outside the top 10 in nine events. He scored three wins while on his way to a dominating performance for the title. A.J. Filbeck finished in second earning two wins of his own. Dave Moyer finished in third followed by Charlie Tibbitts and Rocco Leone to finish out the top five. Kyle Inman, Chris Cunningham, Stephen Denton, Taylor Lamb and Jeff Taylor rounded out the top 10 spots in the points standings.

Travis Welch scored three wins while on his way to his first ever Ted’s Body Shop DIRTcar Pro Stock title. Welch never finished outside the top 10 in beating out Mike Welch and Shane Henderson by six points to take top honors on Friday. With Mike and Henderson tied for second, Bill Knapp finished in fourth and Mike Kazlauskas was fifth. Earnie Staelens, Jerry Streeter, Aaron Page, Pete Stefanski and Frank Hyatt were also awarded point fund money for finishing in the top 10 positions.

Now that champions have been honored, the 2019 season is ready to officially get underway. The Utica-Rome Speedway has a booth at this coming weekend’s Syracuse Motorsports Expo at the New York State Fairgrounds for those looking for information about the rapidly approaching season.


The 2019 season gets started on Sunday, April 14 with the running of the Spring Break Shootout featuring the big-block Modifieds in a 30-lap feature for $2,500 to win, the DirtTrackDigest.com DIRTcar 358-Modifieds, Broedel Fuel Group Sportsman and the Ted’s Body Shop DIRTcar Pro Stocks. Racing is set to get underway at 6pm.