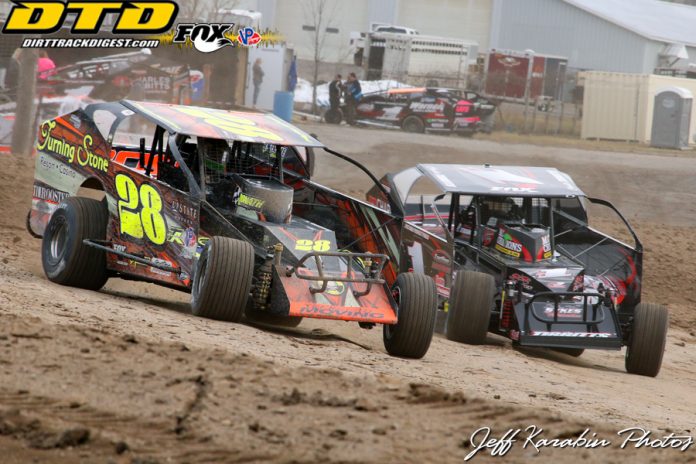 VERNON, NY – The Albany-Saratoga Speedway, Lebanon Valley Speedway and Utica-Rome Speedway, in conjunction with VP Racing Fuels, are excited to announce a new partnership with the creation of the VP Racing Fuels Summer Shootout Series for the DIRTcar Sportsman.

The series features six dates on the schedule with two events scheduled at each facility. Every series race will pay $1,000 to the winner of the feature. Utica-Rome Speedway kicks off the series this coming Sunday, April 28 before it returns on August 25. The series visits Albany-Saratoga Speedway on May 3 and September 13. Lebanon Valley Speedway’s events are scheduled for July 6 and August 31.

“We are excited to work with Lebanon Valley and Albany-Saratoga to offer the VP Summer Shootout Series for the DIRTcar Sportsman division,” cited Utica-Rome Speedway promoter Bill Shea. “We have six races with increased payouts and a huge ultimate grand prize. The VP Summer Shootout Series is a great opportunity for this growing class of drivers to be catapulted into a recognizable regional competition.”


The DIRTcar Sportsman division is one of the strongest in the region with car counts continuing to rise as more and more drivers enter into the division. In 2018 alone, the Albany-Saratoga averaged over 30 cars a week with 60 drivers earning points at the speedway in weekly competition. At Lebanon Valley Speedway the car counts were equally as strong. The Utica-Rome Speedway saw strong support for the class with nearly 30 drivers competing on regular basis while nearly 100 different drivers took to the track at some point during the year.

For more information about the series as the season progresses drivers and fans are encouraged to visit the speedway websites available at:
Albany-Saratoga Speedway – www.albany-saratogaspeedway.com
Lebanon Valley Speedway – www.lebanonvalley.com
Utica-Rome Speedway – www.uticaromespeedway.com

For more information about VP Racing Fuels visit their website at www.vpracingfuels.com/
If you can’t make it to the track on a Sunday night you can catch all the action on DirtTrackDigest.tv from each event throughout the 2019 racing season.
Those looking for information about the upcoming season at Utica-Rome Speedway can like us on Facebook at Utica-Rome Speedway, find us on Twitter @UR_Speedway or on the web at www.uticaromespeedway.com.