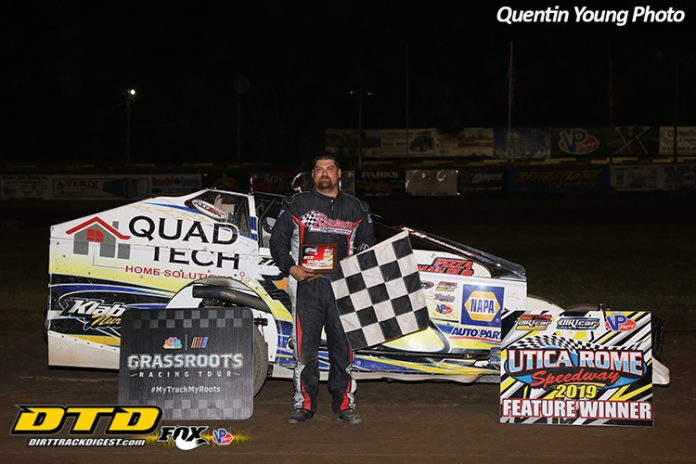 VERNON, NY – Mike Bowman has been so close to winning a Modified feature in the past at the Utica-Rome Speedway, but the former regular was never able to break through. On Friday night Bowman finally got it done in the 30-lap feature presented by Clinton Tractor and Turn One LLC.

“The car was good right from the drop of the green flag,” stated Bowman afterwards. “We blew a tire in hot laps after the first corner so we didn’t know exactly what we had there, but after the heat race I thought we had a pretty good shot tonight.”

Bowman redrew the outside of the front row allowing him to immediately jump to the lead at the start of the feature. He was able to beat track regular Glenn Forward to the number spot.

He remained in front when the only caution flag came on lap six as Teddy Starr slowed in turn two coming to stop. The restart saw Matt Janczuk, in a borrowed ride, pull up next to Bowman for the green. Bowman took off when the race resumed with Janczuk in pursuit.

Bowman caught the tail of the field on lap 13 setting up another challenge. Bowman worked the high and low lanes while Janczuk took advantage of the traffic to close the gap between the pair. Janczuk got close while racing with lapped cars at times, but Bowman continued to pick his way through keeping him at bay.

Janczuk got close, but it wasn’t enough as Bowman was able to secure the $2,000 win. Janczuk, a Sportsman regular, enjoyed running with the Modifieds on this night.

“We’ll take second,” said Janczuk. “Big thanks to the Heintz family for drive this thing. It was put together at the last minute. We worked on it the last couple of nights to get it here. It was just awesome.”

Forward ended up finishing in the third position with Claude Hutchings Jr., fourth and Randy Shantel finishing in fifth.

The grandstands admission price for this event is $20 with seniors/military members/students costing $18. Kids 16 and under are $5. Pit prices for the event are $35 for all DIRTcar Members and $40 for non-members. Pit gates will open at 4:30pm while spectator gates open at 5pm. Racing starts at 7pm.