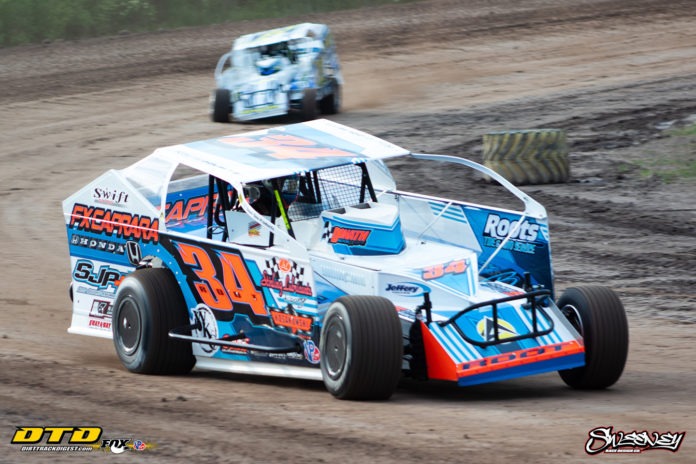 VERNON, NY – Kevin Root and Luke Horning captured wins in their respective 30-lap feature events on Wednesday at the Utica-Rome Speedway in the Conquer Corona 30.

Chad Jeseo was the early leader in the 30-lap Pro Stock main, hounded early by Luke Horning and Josh Coonradt. A tightly packed lead group left Jeseo with no breathing room, nor the cars trailing, as Coonradt surrendered third to Nick Stone by lap eight. As the race neared halfway, the pressure on Jeseo only increased, with Horning finally snatching the lead on lap 14.

Stone took second from Jeseo shortly after Jeseo fell to Horning, with a lap 18 yellow flying shortly after. Jeseo headed to the pits under the caution, with Coonradt now filing into third. With Horning and Stone high, Coonradt knew the bottom was his sole option, driving low and grabbing second from Stone with eight laps left.

Once in second, Coonradt worked and worked on Horning, nearly taking the lead after a small slip from Horning. Coonradt himself couldn’t afford a mistake, with Stone glued to his rear bumper as well. With the top three under a blanket, the checkered flag first waived over Luke Horning, scoring the Pro Stock season opening win. Coonradt claimed second, with Stone, Bo Ballard, and Jeseo completing the top five. 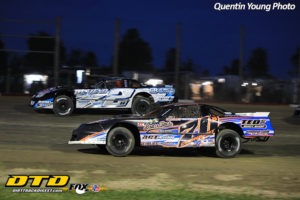 “The car felt good in the heat but Jeseo blew by me, so I needed to change some things,” noted Horning. “Believe it or not, Coonradt bought me this right rear, I’m sure he’s regretting that now. I know Stone had issues on the start and then saw he was second soon after, I knew I had my hands full. Then I saw Coonradt’s nose looking to take the lead away and wondered what happened to us all being friends.”

It was Kevin Root versus Chris Mackey at the start of the 30-lap Sportsman feature, with Root leading the field in the first laps. Mackey hung a close second and took a couple shots at the lead in the opening circuits, but fell in line behind Root after his attempts. A lap 11 caution allowed Matt Janczuk and Zach Sobotka to slide into third and fourth, ready to mount charges on the top two.

Janczuk was the first to take a swing at Mackey, but slipped a right rear over the edge of the track and handed third to Sobotka. Then, Sobotka had his try at Mackey, securing second on lap 20 following a back-and-fourth battle that lasted a handful of laps. With second and third having a duel, Root took the time to extend his lead, rolling up to a 2.5 second gap with ten to go.

Once free of Mackey, Sobotka chopped away at Root’s lead, also aided by lapped traffic. However, Sobotka’s charge was too little and too late, as Kevin Root nabbed the first DIRTcar Sportsman win of the season. Sobotka crossed in second, followed by Janczuk, Mackey, and Brian Calabrese.

“We had such a good year last year I was afraid to make changes,” Root said. “Scott Jeffrey and Randy Williamson got talking to me and I ended up changing the whole car around. I won’t say it’s the best car I’ve ever had, but the drive it has is unbelievable. I didn’t think this package would run the bottom well, but the track came to us and it worked great down there.”

Alan Fink won the 20-lap B-Main for the Sportsman while AJ Martino powered to the win in the Rookie Sportsman feature.