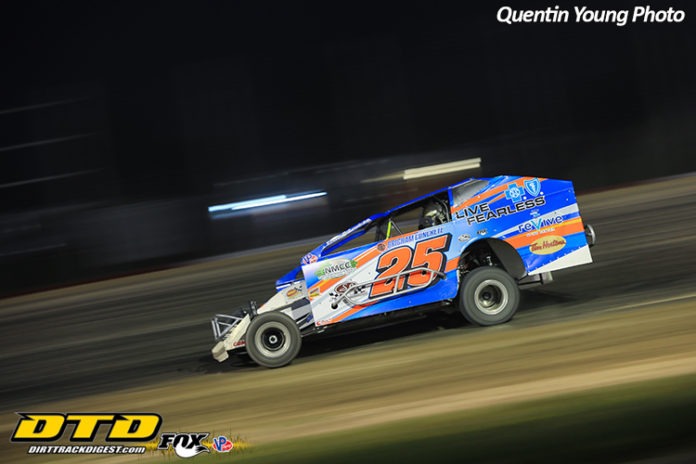 VERNON, NY – On Sunday night, Erick Rudolph was unstoppable at Utica-Rome Speedway. In the opening event for the Dirt Track Digest 358-Modifieds, it was Rudolph leading wire-to-wire for the feature win.

Rudolph beat Mat Williamson off the drop of the green for the 30-lap feature, but four yellows in the first eight laps kept Rudolph in check with the rest of the pack. Pat Ward snuck by Williamson on an early restart to settle into second, while Sportsman winner Matt Janczuk climbed to fourth in a rare Modified appearance.

Ward and Williamson spent much of the middle stages of the event arguing over second, while Janczuk and Dave Marcuccilli went at it for fourth and fifth. As the laps ticked away and the halfway point was passed, Rudolph continued to grow his lead, up to three seconds by lap 20.

While Rudolph ran away, Ward and Williamson continued to battle. Williamson finally pried under Ward and took the spot with 21 circuits done, while further back, Marcuccilli got by Janczuk. With polite traffic and no pressure from behind, Rudolph had clear sailing en route to the finish, claiming the win and the first 358-Modified feature of the season. Williamson came home second, with Ward, Marcuccilli, and Janczuk completing the top five.

“We were real good in the heat race, coming from the back in there,” Rudolph noted. “We made the right changes after the heat and we were just about spot on. I got to the lead at the start so I didn’t know if I was being tracked down or not, but I stayed focused and brought it to victory lane.”

The DIRTcar Sportsman Series opened up for their first points race of the season, a wild feature with four different leaders. Kyle Inman took the top spot with only a handful of laps left, but a late charge by Janczuk was incoming. Janczuk went from fourth to second with five to go, then went after Inman. A last lap, last corner pass around the top scored Janczuk the $1,000 win, with Inman settling for second