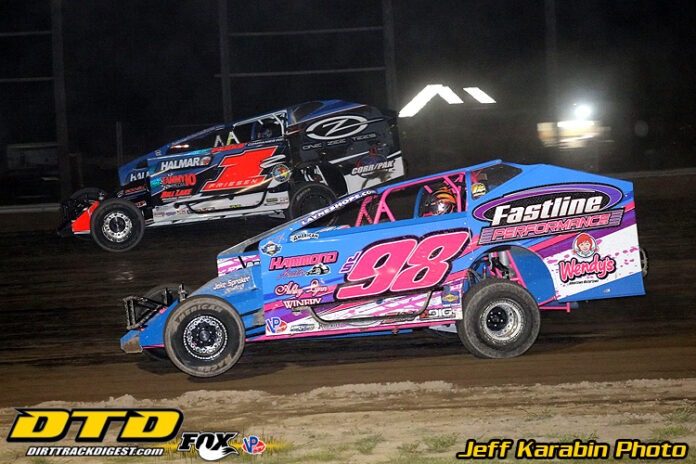 With husband Stewart out of town, Sprakers, N.Y.’s Jessica Friesen kept the family in Victory Lane on Friday night at Utica-Rome Speedway.

The win made history as well, as Jessica became the first woman to ever win a Sunoco Modified race at the Route 5 facility.

After a successful Sprint Car career and a Sportsman division championship at Utica-Rome, Jessica claimed her first career Modified victory at any racetrack.

Friesen raced out to the early lead while Beardsley relinquished second to Middlesex, N.Y.’s Alan Johnson. Rocky Warner, of Johnstown, quickly slid by Beardsley as well to put himself into the third position.

Sheffield, Mass. driver Andy Bachetti and Savannah, N.Y.’s Matt Sheppard quickly worked themselves into the top five in the opening seven laps of the 30-lap feature.

On lap 11, Warner found an opening to take second away from Johnson, and squarely set his sights on Jessica Friesen in lap traffic. One lap later, Johnson made an adjustment, moving to the top side of the Vernon half-mile and found speed, as he drove back around Warner and back into second.

Johnson however would make a mistake just one-lap later, driving over the banking in turns one and two, fading back to fifth.

Following a lap-14 restart, Warner surpassed Friesen off the outside and took the lead, but Jessica was not ready to quit.

Friesen would use the top to her advantage to take the lead back as the field completed its 17th circuit.

After several attempts from Warner, his victory bid ended on lap 22 with apparent driveline issues as he pulled to the infield.

Sheppard was now the man in second trying to chase down Friesen.

In the ensuing laps, Sheppard cut into a three-second deficit, to challenge for the win. Sheppard dove to the bottom trying desperately to get underneath Friesen, but with the top two in lap traffic, Sheppard never got the opening he needed.

Jessica Friesen raced to a historic victory at the ‘Home of Heroes,’ and to an emotional victory lane.

For the second consecutive week, Sheppard came up one spot short, however his efforts have put him on top of the Modified point standings in the early going.

Andy Bachetti brought the Garrity Asphalt Reclamation No. 4 home with a podium run. After the early surge, Alan Johnson settled for a fourth-place run in the Friendly Ford No. 14j and David Schilling of East Greenbush, N.Y., rounded out the top five in his 1-800-Got-Junk family-owned No. 20.

Janczuk used his front row starting position to lead all 25-laps, and another Utica-Rome Speedway triumph.

Gloversville, N.Y.’s Chad Edwards charged from 10th to challenge Janczuk on a couple of late race restarts, but it was to no avail. Janczuk continued to roll the top well, despite the fight Chad Edwards giving him.

Johnstown, N.Y.’s Brian Calabrese came home with another podium finish to start the Utica-Rome season. Dave Richer and Will Shields rounded out the top five.

Nick Stone captured the Next Generation Graphix Pro Stocks portion of the evening for his second win of the young season. The Schenectady, N.Y., native faced several restarts with challenges from Beau Ballard and Jim Normoyle, but Stone was up to everything that was thrown at him.

Normoyle, who was involved in an early race tangle, raced all the way back through the field for a runner-up finish. Beau Ballard rounded out the top-three, after battling with Stone for the win for the second consecutive week.

Clayton DuMond was back in Victory Lane for in the Fastline Performance Limited Sportsman division. DuMond joined Stone and Janczuk as multi-time winners in the opening two weeks of the season.

DuMond led all 15-laps in a dominating performance. Jeremy Slosek chased DuMond for the entirety of the race, but never could offer a challenge. Stephen Gray rounded out the top-three after winning the heat race.

In the D&S Landscaping Junior Slingshot portion, youngster Colt Kimball went wire-to-wire in a war of attrition. A six-car field turned into two finishers, as Kimball bested the field to pick up the victory.

Racing resumes Friday, May 28, as the Sunoco Modifieds run Twin 20’s as part of the ‘Memorial Day Kickoff.’ All regular divisions will be in action.

Did Not Start: Marshall Hurd

Did Not Start: Dustin Sehn.