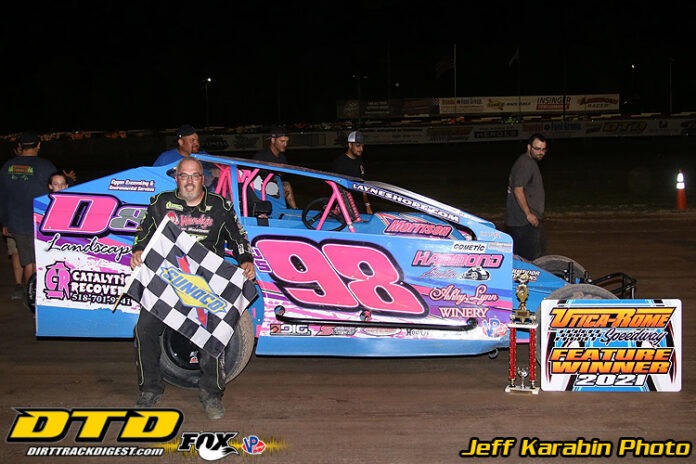 VERNON, NY – A night of firsts.

Five of the seven winners on Friday night were first-time Utica-Rome Speedway winners.

Leading them all was Johnstown, N.Y.’s Rocky Warner, who also won his first race for car owner Jason Simmons, in their No. 98. Warner has had success at Utica-Rome, a Crate 602 Sportsman champion in 2015, but never a Modified victory before Friday night.

Warner started from the fourth position, while Marshall Hurd and Sean Beardsley occupied the front row.

At the drop of starter Joe Kriss’ green flag, Warner wasted no time, quickly darting to second off turn two and setting his sights on Marshall Hurd’s back bumper.

For the first two laps Hurd ran the top side, while Warner pestered him on the bottom side of the smooth, half-mile racing surface. Warner’s pressure forced Hurd to try the bottom, and Warner took advantage, rolling the top and taking the lead on lap three.

Warner got out front and set sail, while a host of drivers battled in the rest of the top five. East Greenbush, N.Y.’s David Schilling led Andy Bachetti, Matt Sheppard, and Stewart Friesen around Hurd, and the four of them immediately went to battle for the runner-up position.

While the four of them battled it out, Warner continued to set a torrid pace, slicing through traffic, and opening nearly a straightaway lead.

On lap 12, Sheffield, Mass. driver Bachetti went to the middle and split Matt Sheppard and David Schilling to take second. The following lap, Sheppard used the bottom to drive underneath Schilling and take third.

At the halfway point, Warner’s lead was up over a straightaway. However, with Bachetti, Sheppard and Friesen the cars now chasing, Warner’s lead began to shrink.

A few laps later, on the 19th circuit, Bachetti went over the berm in turns one and two, allowing Sheppard and Friesen to take over the podium positions.

As the Sunoco checkered flags flew in a non-stop, 30-lap affair, ‘The Flying Squirrel,’ Rocky Warner raced to his first ever ‘Home of Heroes’ triumph.

Savannah, N.Y.’s Matt Sheppard claimed his third consecutive runner-up finish to open the season in his Hurlock Auto & Speed No. 9s while Stewart Friesen rounded out the top-three in his Halmar International No. 44.

Andy Bachetti claimed fourth in the Garrity Asphalt Reclamation No. 4, and Middlesex, N.Y.’s Alan Johnson rounded out the top five in his Friendly Ford No. 14j.

In the Worthington Industries Crate 602 Sportsman division, Vernon, N.Y.’s Willy Decker Jr. picked up a crowd-pleasing victory in the 25-lap affair. The win made Decker Jr. another first-time winner on Friday night.

The hometown kid started on the outside of the front row, and after one early yellow, the youngster found a rhythm on the top side of the speedway. On the seventh circuit, Decker Jr. raced around Mexico, N.Y.’s Addison Bowman, and never looked back.

Oneida, N.Y.’s Matt Janczuk followed up his two season opening wins with a runner-up finish. The final 24-laps went non-stop, as Janczuk meticulously picked his way to the front, before ultimately running out of laps to take a shot at the win.

Addison Bowman held on for third, with Johnstown, N.Y.’s Brian Calabrese, and Genoa, N.Y.’s Will Shields rounding out the top five.

The RUSH Late Models made their first appearance of 2021 at Utica-Rome Speedway, and it was Penfield, N.Y.’s Chad Homan winning in impressive fashion.

Homan started on the pole; however fellow front-row starter Austin Allen, of Rexville, N.Y., raced around Homan at the drop of the green flag.

Homan chased Allen for a couple of laps, but never gave up on the bottom side of the speedway. As Allen began to struggle to hold the bottom, Homan’s racecar was getting better and better, ultimately taking the lead for good on lap five.

Austin Allen held on for second, and Sean Beardsley, who was pulling double duty with the Modifieds and Late Models, rounded out the top three.

The Next Generation Graphix Pro Stocks put on another thrilling feature. After several twists and turns, an ecstatic Beau Ballard, of Grand Gorge, N.Y., was another first-time Utica-Rome Speedway winner.

Ballard was one of four drivers who led in the second half alone of the 20-lap feature event. Jason Morrison, who led a large chunk of the feature, had to settle for second, with Hamilton, N.Y.’s Bill Knapp rounding out the top three.

Gray was up to the task, getting a great restart and driving for the win. DuMond held on for second while Oxford, N.Y.’s Matt Backus rounded out the top three.

Brett Putnam nabbed the Senior Services Insurance All-Star Slingshot victory after finishing runner-up in the season opener for the Slingshots.

Colt Kimball was dominant again in the D&S Landscaping Junior Slingshots, racing to his second consecutive win to open the season.