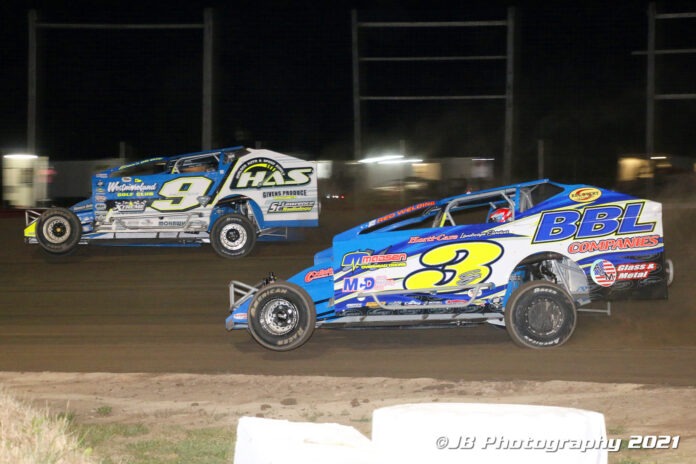 VERNON, NY– Superman has no kryptonite.

For the third consecutive race night, Savannah, N.Y.’s Matt Sheppard walked away the Sunoco Modified 30-lap main event at Utica-Rome Speedway. On Neivel Precision Pluming & Mechanical night, the win was once again worth $3,500 for Sheppard’s efforts.

After beginning the season with three consecutive runner-up finishes, Sheppard has found the extra gear, and has become the man to beat on Friday nights at the ‘Home of Heroes.’

“We had an awesome racecar tonight; we’ve been tweaking it every week and it was a pleasure to drive tonight,” Sheppard explained in Victory Lane, “the track was great as well, it was super-fast and smooth all night.”

Sheppard began his quest for a third consecutive win from the 10th starting position, while Tim Mayne and Brian Gleason occupied the front row.

Gleason, a Glenville, N.Y., native, quickly jumped out to the lead from the outside row, while Sheffield, Mass. star Andy Bachetti jumped from fifth to second on the initial start.

On the restart, Sheppard, who made his way to sixth on the opening lap, quickly went back to work. Sheppard used the outside line to drive to third in turns one and two and followed that with a slide job up in front of Bachetti to take second away.

Another yellow with three laps completed brought the field back together and gave Sheppard an opportunity to start alongside Gleason. When green replaced yellow again, Sheppard was not to be denied, flying around Gleason and taking the lead.

However, another yellow came out, this time for Bachetti on lap five for a left rear flat tire. Bachetti would rejoin and the field would finally go on a long green flag run.

Sheppard entered lap traffic on the lap-14 mark, as Johnstown, N.Y.’s Rocky Warner and Middlesex, N.Y.’s Alan Johnson, who started 21st, battled for second while trying to close in on Sheppard.

Bachetti was charging through the field as well, racing into the top-10, recovering from the flat tire.

A yellow came out on lap 20, once again bunching the field together, this time giving Alan Johnson a crack at Sheppard. It was to avail, as Sheppard ran away to a three-and-a-half-second victory in the remaining 10 laps in his Hurlock Auto & Speed Supply No. 9s.

Alan Johnson brought the Friendly Ford No. 14j home second following issues that plagued him in hot laps and his heat race. Andy Bachetti grabbed third after a tire change his Garrity Asphalt Reclamation No. 4.

Rocky Warner brought his Jake Spraker owned No. 1J to Utica-Rome for the first time and finished fourth, and Dave Marcuccilli rounded out the top-five in just his second visit to Utica-Rome Speedway this season.

Otisville, N.Y.’s Corey Cormier came home eighth in the Comfort Express No. 27j and Sean Beardsley finished ninth in his Neivel Precision Plumbing No. 18s. Vernon, N.Y.’s Willy Decker rounded out the top-10 in his family-owned No. 1x.

In the Worthington Industries Crate 602 Sportsman division, Oneida, N.Y.’s Matt Janczuk returned, and raced from his 12th starting position to take the lead away from Addison Bowman on a mid-race restart.

Janczuk led the rest of the way, while the Mexico, N.Y., native Bowman tried desperately to keep pace with Janczuk. Janczuk would cross the finish line first.

However, after post-race inspection, Janczuk was disqualified for a rev box reading not meeting the required 6,000 limit rule.

The win was awarded to Bowman, the first of his career at Utica-Rome, worth $1,000. Oneonta, N.Y.’s Brad Alger finished second and the point leader Dave Richer rounded out the podium finishers.

Matt Buckovan won the Cool Stuff Antiques Four Cylinder race, in just his third ever appearance in a racecar. Jean Foster was the winner of the Single Cam portion of the event.

Kyle Fallis picked up the win in the Senior Services Insurance All-Star Slingshot division, his second of the season. Fallis took advantage of Dan Slosek breaking to seal the victory.

Corky Warner was first time winner in the D&S Landscaping Junior Slingshot division, becoming the first driver to beat Colt Kimball in a heat race or feature in the Junior Slingshots.

Racing resumes Friday, July 16, for Tom Cole’s Lexi LLC. night. Grandstand admission will be just $5 for EVERYONE. The Sunoco Modifieds will headline the event. Joining the modifieds will be the Worthington Industries Crate 602 Sportsman, Next Generation Graphix Pro Stocks, Fastline Performance Limited Sportsman, and the Cool Stuff Antiques Four Cylinders.

The Senior Services Insurance All-Star Slingshots and the D&S Landscaping Junior Slingshots will be on hand as well on the inner oval.