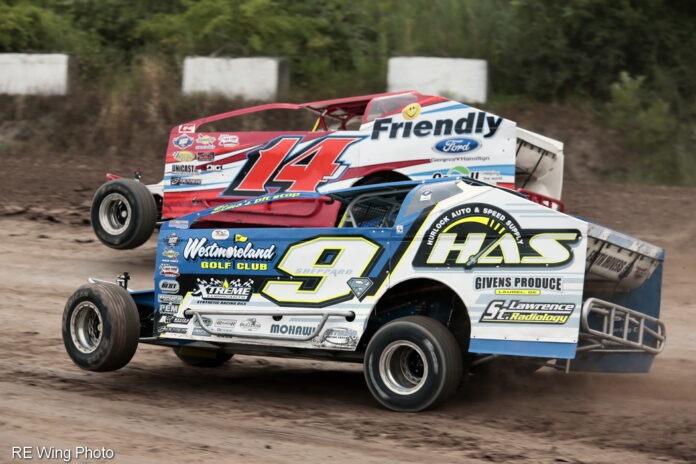 After a two-week hiatus, Savannah, N.Y.’s Matt Sheppard returned to Victory Lane on Friday night, claiming to ‘Dog Days of Summer’ special for the Sunoco Modifieds.

Sheppard’s quest for win No. 5 of the season would start from the 12th position, while New Yorkers Adam Roberts and JaMike Sowle brought the field to the green flag.

Sowle used the outside as a launch pad to jump out the early lead, While Sheffield, Mass. star Andy Bachetti was making moves early. A yellow on lap three reset the field, and Bachetti had quickly climbed from his eighth starting position, into the top five.

When green replaced yellow, Sheppard and Sprakers, N.Y.’s Stewart Friesen quickly made their presence known. Sheppard would replace Bachetti in the top five, with Friesen knocking on Bachetti’s back door.

Another yellow presented another restart on lap five, and Vernon, N.Y.’s Willy Decker was giving Sowle all he could handle for the lead, while Sheppard got to third and Bachetti followed him into the fourth position.

Two laps later, Sheppard drove around Decker for the runner-up position and switched to the bottom as Sowle worked on the topside of the progressively banked half-mile.

One trip around the speedway later, on lap eight, Sheppard worked his way to the front and began to set sail.

Meanwhile, Friesen’s racecar began to get better, as he quickly began to pick his way through the top five. Friesen worked by Decker for fourth on lap 10, and by JaMike Sowle for third on the 12th trip around the speedway.

Lap 15 saw another yellow bring the field together, and Sheppard’s straightaway lead evaporated, with Bachetti and Friesen now on his heels.

Johnstown, N.Y.’s Rocky Warner was also showing his charge to the front, as the ‘Flying Squirrel’ had risen from his 14th starting position to sixth at the halfway point.

When the field went back to green, Friesen fell back to fourth before driving back to third and around Bachetti for the runner-up spot on lap 18. Friesen turned his attention to reeling in Sheppard.

On the 21st circuit, Sheppard nearly made a grave mistake. Working around lap traffic, Sheppard got his right rear wheel over the cushion, nearly driving off the racetrack. Sheppard collected himself, but Friesen was within four car-lengths down the back straightaway.

A lap-25 yellow once again reset the field, and setup Friesen’s best opportunity to drive by Sheppard.

When starter Joe Kriss’ green flag flew, Friesen wasted no time, throwing a slide job at Sheppard, clearing Sheppard but only for a moment. Sheppard’s momentum off the corner carried him by Friesen and back to the lead for good.

“When I saw it coming, I was able to get the car turned, and luckily I got enough traction to drive back by him,” ‘Super’ Matt Sheppard explained.

The win was Sheppard’s fifth of the season and furthered his stranglehold on the Sunoco Modified points championship.

After two consecutive wins, Friesen settled for a runner-up finish with Andy Bachetti picking up a podium finish.

Rocky Warner charged all the way to the fourth position from 14th and Altamont, N.Y.’s Brian Gleason rounded out the top five.

Oneida, N.Y.’s Matt Janczuk raced to his sixth win of the season in the Worthington Industries Crate 602 Sportsman feature event. Janczuk started in the 12th position but wasted no time getting to the front.

Early yellows, great restarts, and a bold move, going three-for-one off turn four gave Janczuk the lead for good on lap four. Janczuk paced the field the remaining 21-laps while the battle for second was hot and heavy.

The RUSH Late Models were on hand for their second and final appearance of 2021, and Penfield, N.Y.’s Chad Homan picked up his second win of the season at the ‘Home of Heroes.’

Homan made a late race charge, and a last lap pass over hometown driver Brett Belden to pick up the win. Union Springs, N.Y.’s Chris Fleming rounded out the top three.

Schenectady, N.Y.’s Nick Stone grabbed his sixth Next Generation Graphix Pro Stocks win of the season. After an eventful heat race, where Stone finished with no front bumper and no hood, he and the crew pieced it back together to claim another win in 2021.

Did Not Start: Travis Welch.