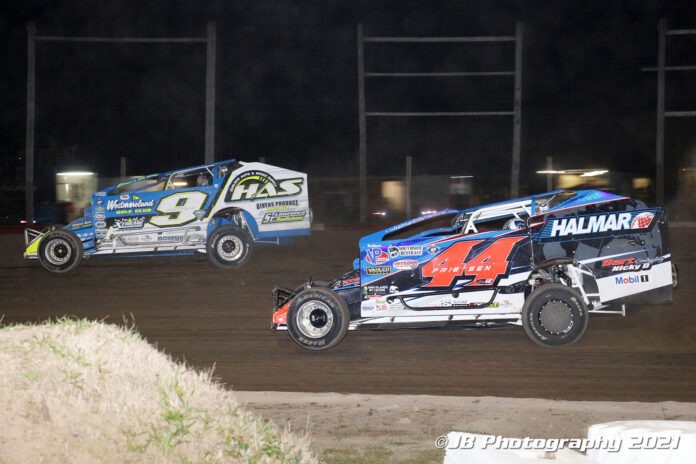 VERNON, NY – Earned every bit of it.

With speedway officials and racers dodging rain drops in the area all night, Sheppard won arguably the race of the year in the Modified division as the top five were under a blanket in the closing laps at the ‘Home of Heroes.’

“My car wouldn’t go off the bottom of the corner’s, (Willy) Decker was starting to have problems, it was raining a little bit… it was a crazy last five laps,” a relieved Sheppard proclaimed in Victory Lane.

Sowle pulled the field down the back straightaway and lead for much of the early going, while Vernon, N.Y.’s Willy Decker quickly followed Sowle around Hurd and into the runner-up spot.

While Decker hung with Sowle up front, Sheppard wasn’t his ‘Super’ self. Sheppard was bogged down at the back half of the top-10, struggling to make his way forward.

“The track was so heavy tonight, it was really hard to make up ground,” Sheppard explained of his early struggles to make his way forward.

As the race went on, the battle for the lead got more and more exciting to watch, as Willy Decker continued to try and pry his way underneath JaMike Sowle for the lead.

Sheffield, Mass., star Andy Bachetti had risen to third, but Sheppard got an excellent jump on a lap-six restart to climb to fourth and eventually slide around Bachetti for third.

While Sowle and Decker continued to mix it up at the front, Sheppard drew nearer with each passing lap. A lap-12 yellow, however, would change the complexion of the remaining 18 laps.

On the restart, Decker finally was able to make the bottom work to slide by Sowle for the lead. Andy Bachetti wasn’t far behind after getting around Sheppard on the restart, he quickly slid underneath Sowle for second one lap later.

Sheppard wasn’t far behind, getting to third as the field came by Joe Kriss’ halfway sign.

Shortly thereafter, Sheppard was finding a rhythm on the outside, driving around Bachetti to take second just before a red flag was displayed as Adam Roberts went up and over in turn four.

When the field went back to racing, Sprakers, N.Y.’s Jessica Friesen was the Friesen on the charge, driving from fourth to second, while Willy Decker continued to pace the field. Jessica’s housemate Stewart Friesen began making hay, as he had risen to fifth and was challenging Bachetti for fourth.

With the remaining 11 laps going non-stop, Sheppard found his rhythm again on the outside, driving Jessica Friesen with five laps to go and setting his sights on Decker.

Sheppard wouldn’t have to work too hard to get the lead, as Willy Decker slowed and pulled off the track the field completed their 27th circuit.

Sheppard would seal the deal in the remaining three laps to claim his sixth win of the season and extend his Sunoco Modified point lead.

Bachetti took second on the final lap in his Garrity Asphalt Reclamation No. 4 and Jessica Friesen held on for a podium finish in the One Zee Tees No. 1Z. Stewart Friesen battled an ill-handling racecar all night to grab fourth in his Halmar No. 44 and JaMike Sowle got his best finish of the season in the Carole and Alton Palmer No. 76.

Covington Township, Pa.’s Alex Yankowski came from the 21st starting position to get sixth in his family-owned No. 84y and Clay, N.Y.’s Bob Henry Jr. claimed seventh. Oxford, N.Y.’s Rusty Smith raced to an eighth-place effort with Johnstown, N.Y.’s Rocky Warner grabbing ninth in the Jason Simmons owned No. 98. Brian Gleason rounded out the top-10 in his BBL Companies No. 3G.

Oneida, N.Y.’s Matt Janczuk claimed the Worthington Industries Crate 602 Sportsman feature for the seventh time in 2021 at Utica-Rome Speedway. His experience and love the ‘Home of Heroes’ shows every week, as once again the

Oneida native drove from the 12th position to the lead inside the first 10 laps.

Janczuk’s win also allowed him to take back the top spot in the Worthington Industries Crate 602 Sportsman point battle.

South New Berlin, N.Y.’s Payton Talbot kept pace with Janczuk as long as he could but ended up settling for second. Genoa, N.Y.’s Will Shields raced to a third-place finish and Mexico, N.Y.’s Addison Bowman chased him in fourth. Sherburne, N.Y.’s Allan Hodge rounded out the top five.

Schenectady, N.Y.’s Nick Stone joined Janczuk as seven-time winners this season in the Next Generation Graphix Pro Stocks division. The first 18 laps went caution-free as Stone worked his way to the lead.

Grand Gorge, N.Y.’s Beau Ballard found his way to the runner-up spot before the races only yellow setup a green-white-checkered dash between the top two.

In the end, Ballard couldn’t work the bottom well enough to slide underneath Stone for the win. Ballard settled for his sixth consecutive runner-up finish on the season. Johnstown, N.Y.’s Jason Morrison rounded out the podium with Ed Kotary and A.J. Walters finishing in the top five.

For the second consecutive week, Baldwinsville, N.Y.’s David Hackett Jr. picked up the Fastline Performance Limited Sportsman 15-lap feature. Hackett took advantage of a mistake by point leader Clayton DuMond and raced his way by Matt Backus for the lead he would never relinquish.

Racing resumes Friday, August 20 as Utica-Rome Speedway. The Sunoco Modifieds headline the night and are joined by the CRSA Sprint Cars for the second time this season. Also on the card are the Worthington Industries Crate 602 Sportsman, Next Generation Graphix Pro Stocks, Fastline Performance Limited Sportsman, and the Cool Stuff Antiques Four Cylinders.

Did Not Start: Luke Horning.

Did Not Start: E.J. Gallup.