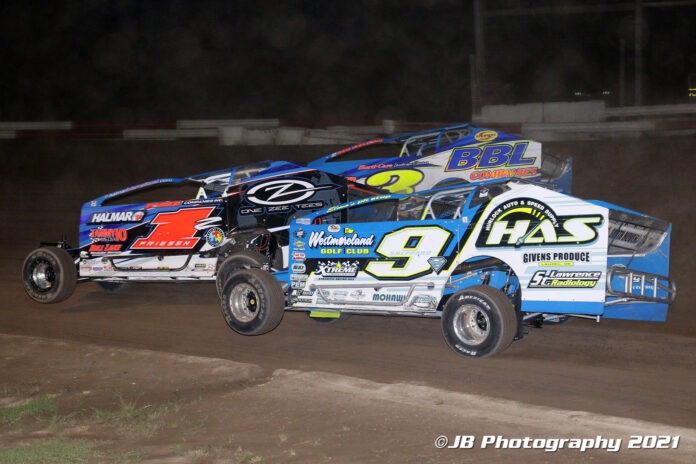 On Sunday, Sept. 5, Broedel Fuel Group presents the Fuccillo Autoplex of Nelliston Thunder on the Thruway Finale at Utica-Rome Speedway.

The ‘New Yorker 100’ rounds out the five-race mini-series across Utica-Rome and Fonda Speedway.

The Sunoco Modifieds will go for their longest race and highest pay of the season at the ‘Home of Heroes,’ in a 100-lap, $12,000-to-win feature event in memory of Jumpin’ Jack Johnson.

The 100-lapper will pay $500-to-start and the Thunder on the Thruway champion will be crowned.

Sprakers, N.Y.’s Stewart Friesen leads the Sunoco Modified points standings in the Thunder on the Thruway Series, winning all four of the events thus far.

The most recent New Yorker event was run as a 100-lap event on May 13, 2018 with Matt Sheppard winning over Jeremy Wilder, Mat Williamson, Larry Wight and Billy Dunn.

Also on the card will be the Worthington Industries Crate 602 Sportsman and the Next Generation Graphix Pro Stocks to round out their Thunder on the Thruway championship chase.

Next Generation Graphix has boosted the Pro Stocks purse for their 20-lap series finale. The race will still be $1,000-to-win but will now pay $120-to-start with boosted pay throughout the field.

The powerful Patriot Sprint Tour (PST) 360 Sprint Cars will also make their one and only appearance at the Route 5-oval in the season finale.

Full Thunder on the Thruway points standings for all three divisions are available on the Utica-Rome and Fonda Speedway (https://www.thefondaspeedway.com/) websites.

Pit Admission is $35 for Utica-Rome Speedway members and $40 for non-members.

Two days of racing are planned for Utica-Rome Speedway on Labor Day weekend with a complete program on Friday, Sept. 3.