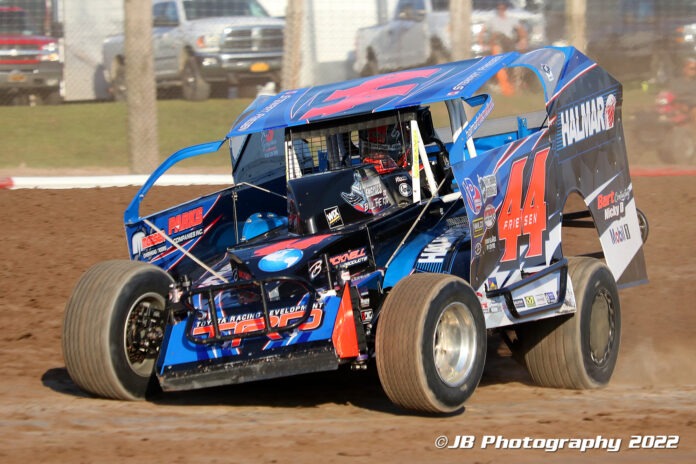 The win was Friesen’s second consecutive win in his last two appearances at the ‘Home of Heroes,’ climbing from his 12th starting position in the non-stop event.

“This is really cool, to get 61 at Utica-Rome, Richie’s (Evans) number … hopefully we can get 62 on his night next Thursday,” proclaimed Friesen on winning his 61st career Modified feature at the Route 5 oval just days before the ‘Richie Evans Remembered’ Short Track Super Series event on July 21.

The win for Friesen paid $3,400, an extra $1,000 on top of the normal purse. $600 came courtesy of Jeffrey Storey and JSD Express Inc. as the winner of the affair and $400 originated from Roxann Cullen as the first of Tom Cullen’s three drivers (Friesen, Matt Sheppard, Willy Decker) across the line.

While Friesen raced from his starting position on the outside of the sixth row, Oneida, N.Y.’s Randy Shantel and Unadilla, N.Y.’s Billy Decker occupied the front row.

Decker quickly raced to the lead from his outside pole starting position and began to extend his advantage.

Norwich, N.Y.’s Alan Barker quickly followed Decker to occupy the runner-up position, while Friesen was rapidly climbing through the field, racing into sixth in the opening four laps.

The seventh circuit however would slow Friesen’s charge and make his quest for the win a difficult one, as he slipped just over the embankment off the second corner, losing valuable track position.

While Friesen was trying to battle back from his slip up, Sheffield, Mass., native Andy Bachetti began to turn up the pressure on Alan Barker for the runner-up spot with Middlesex, N.Y. native Alan Johnson in lockstep with the pair in front of him.

Decker continued to lead at the halfway mark, with Barker, Johnson, Friesen, and Yankowski rounding out the top five after Bachetti slipped over the turns three and four embankment, causing him to fall to seventh.

Friesen quickly began to pick cars off one at a time, racing around Yankowski on lap 16. Three laps later Friesen completed a successful slide job to get by Alan Johnson and into a podium position.

Lap 23 saw Friesen execute another slide job to get by Barker for second and set his sights on race leader Billy Decker. Friesen quickly cut into Decker’s advantage and made his move on the 27th circuit to take the lead.

Friesen would lead the remaining four circuits to claim the victory and the $3,400 to boot.

“It’s awesome to win on Westmoreland night. Tom and Roxann did so much for my career, helped me make my name in the sport and I can never thank them enough,” explained Friesen of his win on a night sponsored by his former car owner.

Billy Decker held on for second in his Jeremy Smith Racing No. 91 and Savannah, N.Y.’s Matt Sheppard made a late race charge to grab the final podium spot aboard his Hurlock Auto & Speed Supply No. 9s. Sheppard started 15th.

Gloversville, N.Y.’s Rocky Warner spent much of his race just outside the top five, before coming home fourth in the Jason Simmons Racing No. 98 and Bachetti battled back from his earlier slip up to round out the top five.

Finishing sixth through 10th, respectively, were Yankowski, who faded late after making contact with another car; Barker, who spent a large majority of the race in the runner-up spot; Genoa, N.Y.’s Pat Ward in his Joe Beyea owned No. 42p; York, N.Y.’s Kyle Coffey in his Carl Meyers Enterprises No. 23c; and Masonville, N.Y.’s Shaun Walker rounded out the top-10.

Heat winners, claiming $400 each courtesy of Tadd Parks, were Decker, Ward, and Bachetti.

Altamont, N.Y.’s Jeff Trombley became the first repeat winner of the season for the Super Gen Products CRSA 305 Sprint Cars. After a back-and-forth battle between the top four cars, it was Trombley claiming his second win of ’22 in the 20-lap event.

Durhamville, N.Y.’s Matt Janczuk continued his hot streak, coming from the 12th starting position to race by Addison Bowman on a lap-12 restart for the win, worth $1,000.

The win was Janczuk’s fourth consecutive and moved him ahead of Payton Talbot in the Worthington Industries Crate 602 Sportsman championship chase.

Grand Gorge, N.Y.’s Beau Ballard returned to Utica-Rome Victory Lane for the first time in over a month with the Next Generation Graphix Pro Stocks. Ballard started from the fourth position and avoided an opening lap wreck to restart on the front row.

From there Ballard led all the 19 remaining laps for a dominant win. Fort Johnson, N.Y.’s Josh Coonradt raced to second in the late stages of the race but fell short of catching Ballard for the win. Averill Park, N.Y.’s Jay Corbin took home the third spot and Newport, N.Y.’s A.J. Walters claimed fourth. Hamilton, N.Y.’s Bill Knapp rounded out the top five.

Seth Martin became the first Fastline Performance Limited Sportsman driver to reach four wins on the season. Martin’s win pulls him to within just two points of Zack Welch atop the point standings.

Martin raced Eric Jensen in the early stages and never looked back for the victory. E.J. Gallup took home his fourth consecutive runner-up finish and Welch rounded out the top three in the 20-lap feature.

Matt Bukovan (DOHC) and Jacob Kimball (SOHC) were both triumphant with the Fonda Fair Four Cylinder 12-lap main. For Bukovan, the win was his second of the season and extended his point lead over David DeNova. The win for Kimball was his fourth of the season.

Racing resumes Thursday, July 21 at Utica-Rome Speedway as the Bob Hilbert Sportswear Short Track Super Series (STSS) Fueled By Sunoco returns to the ‘Home of Heroes’ for the ‘Richie Evans Remembered 61.’ The STSS Modifieds race for 61-laps and a $6,100-plus top prize. The STSS Crate 602 Sportsman join the program as well.