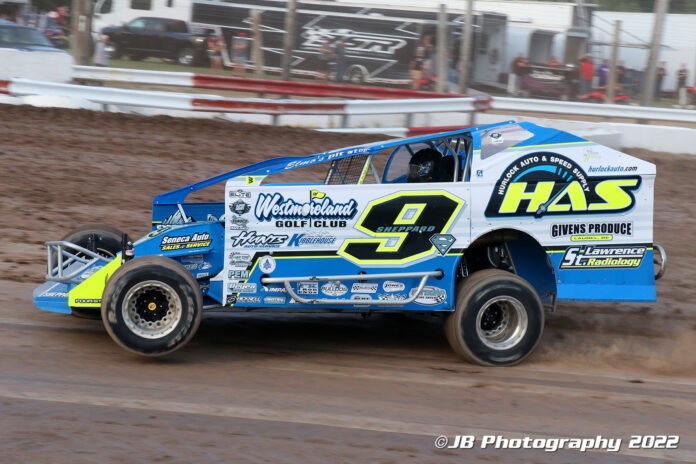 For the ninth time this season, Matt Sheppard invaded Victory Lane at Utica-Rome Speedway with the Sunoco Modifieds.

Sheppard raced from his 12th starting spot to take the lead away on the fourth circuit of the 30-lap main, leading the remaining 26 laps for a dominant victory and the $2,400 top prize.

“The seas don’t always part like that but when they do, we’ll definitely take it,” proclaimed Sheppard of his rapid charge to the lead.

“We were able to get out front and I don’t think there were any more cautions, things definitely went our way tonight,” Sheppard said of his dominant performance.

York, N.Y.’s Justin Wright and Nick Heywood, of Plattsburgh, N.Y., led the field to the green flag for the 30-lap main event. Wright quickly raced out to the top spot, while Heywood was under fire from Genoa, N.Y.’s Pat Ward for the runner-up spot.

Ward slid by Heywood just prior to the completion of lap two before a yellow flag fell for Richie Price, who had spun in the first and second corner.

Sheppard used the opening two laps to dice through the field, working his way into the fifth position before the caution came out. Sheppard used the inside line race by the likes of Billy Decker, Alex Yankowski, and Alan Barker to crack the top five just prior to the caution.

The ensuing restart, Sheppard found the bottom lane again forcing a three-wide fight for second down the backstretch with Ward and Binghamton, N.Y.’s Darren Smith.

Sheppard would muscle the spot away going into the third corner and set his sights on the leader Justin Wright.

Wright led the third lap, but that was the only challenge he could muster up. Sheppard raced to the bottom of the first turn and darted underneath Wright, taking the lead away when the field exited the second turn.

A yellow flew again on the sixth lap, as Brian Murphy was spun in the wrong direction over the third turn banking.

Sheppard, however, was too strong, quickly pulling out in front and driving away from the rest of the field.

Sheppard dominated the remainder of the feature, claiming the win by over seven-and-a-half seconds.

Unadilla, N.Y.’s Billy Decker raced into the runner-up spot aboard the Jeremy Smith Racing No. 91 machine. At one point it appeared as though Decker might have something to offer Sheppard for the win, but Decker was never able to get close enough to challenge the eventual victor.

Gloversville, N.Y.’s Rocky Warner continued his recent hot streak with a third-place finish in his Jason Simmons Racing No. 98. The podium run was Warner’s third consecutive finish inside the top three at Utica-Rome Speedway.

Sprakers, N.Y.’s Stewart Friesen battled in the back half of the top-10 for much of the 30-lap feature before a late race charge rewarded him with a fourth-place finish.

Durhamville, N.Y. native used multiple restarts, taking advantage of each one to pick off more cars. Janczuk climbed from his 17th starting position to get to second. It appeared Janczuk would settle for second, as Willy Decker Jr. was setting the pace by a healthy advantage.

A lap-21 restart gave Janczuk the opening he needed, racing to the outside of Decker Jr. to take the lead and the win.

Rome, N.Y.’s Chris Mackey would claim the runner-up position and

South New Berlin, N.Y.’s Payton Talbot used a late race charge to round out the podium.

Coonradt raced by Bret Belden and Bill Knapp just shy of the halfway mark and went on to win by over seven seconds over the rest of the field.

Newport, N.Y.’s A.J. Walters had his best run of the season, coming home second, and Bret Belden rounded out the top three.

Jensen held on for the runner-up position and point leader Seth Martin rounded out the top three.

The Fonda Fair Four Cylinders saw two first-time winners in 2022 on Friday night. David DeNova (DOHC) started on the front row and led all 12-laps to claim the victory.

Racing resumes Friday, August 12 at Utica-Rome Speedway with the ‘Dog Days of Summer’ program. The Sunoco Modifieds will race for a boosted $3,500 winners share. A full program is on tap plus the slingshots on the inner oval.

Did Not Start: Jason Lopes