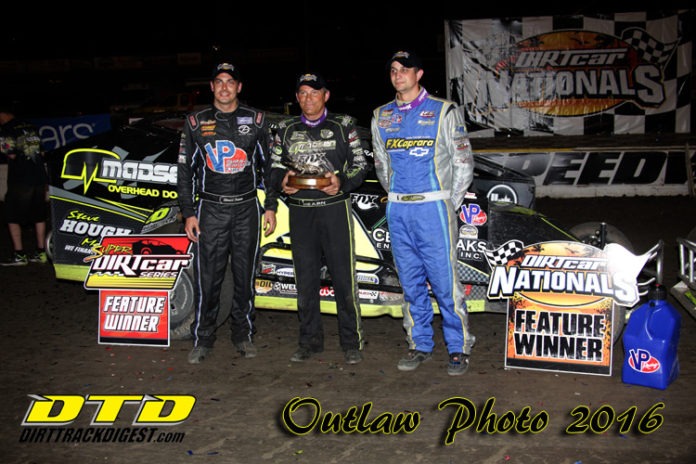 BARBERVILLE, FL – Brett Hearn did the improbable on Saturday night. The veteran driver from Sussex, N.J., raced his way from the 21st starting position in the 50-lap DIRTcar Nationals Super DIRTcar Series finale to take his 23rd career win at the Volusia Speedway Park.

“We got a huge favor tonight that we didn’t really expect in that we had to run the consi,” said Hearn. “We got some laps out there after the track dried out. After we ran the consi we made some really great decisions. Hats off to my crew. We really struggled this week. We changed everything we could think of including stuff today, unbelievable stuff. These guys were up early working their butts off and so this is meaningful for all the guys that came down with me this year. We persevered.”

Hearn won the battle but it was Sheppard who won the war as he captured his second career DIRTcar Nationals title. Throughout the four days of Big Block action, Sheppard never finished outside the top five. He finished fifth on opening night and then took home a win before a second and a third to conclude the week.

Stewart Friesen started on the pole of Saturday’s finale and quickly darted to the front of the field with Tim Fuller taking over second on the first lap. Before a second lap could be completed a multi-car incident occurred in turns one and two. Nearly everyone was able to continue with the exception of Tim Kerr who was towed back to the pit area.

Friesen lined up on the outside as the leader with Fuller next to him. Fuller stayed with Friesen when the race got back underway. Fuller attempted to dive underneath him through turns one and two. Friesen was too strong and immediately dispatched Fuller.

Over the next several laps Friesen and Fuller battled one another on a number of restarts. Each time Friesen proved to be up to the task. The race’s final caution came on lap 18 for Erick Rudolph. Rudolph blew a right rear tire and slowed dramatically on the speedway. Friesen was the leader while Hearn had just moved his way into the top ten.

From this point forward Hearn put on a show. Electing for a different compound than other competitors Hearn began his march forward. He picked off a nearly a car per lap allowing him to work inside the top five by the midway point. Once there, Friesen had a large lead on Hearn, but he never gave up hope of gaining more spots.

“Once we got consecutive laps and I broke into third I could feel myself reeling those guys in,” Hearn said. “They were getting looser and looser and I was getting better and better. When I got to third I was happy to be on the podium. Then I realized I was reeling them in pretty quick.”

It took Hearn only ten more laps to track down the second place running Sheppard on lap 34, then four laps later he was able to muscle the lead away from Friesen. Friesen moved up a lane in hopes of slowing Hearn but it wasn’t enough. Hearn dove low and drove right on by as they exited turn two.

“I had enough side bite to cut left and get down low in the corner if I needed too,” Hearn said. “I could also lay it out there and use the momentum if I needed to as well. I was able to get under him (Friesen) and take the lead.”

After taking the top spot, Hearn set the cruise control and pulled away from the rest of the field. He was flawless over the final few laps in traffic as he finally got the handling dialed in on his Teo Pro Car. He was able to maneuver around the speedway so well that he went on to win by nearly seven seconds at the checkered flag.

Friesen, of Sprakers, N.Y., nipped a hard charging Sheppard at the line. For Friesen it was his best run of the 2016 DIRTcar Nationals as he struggled earlier in the week.

“We were great all week,” Friesen said. “We made some big swings at it this week and learned some things that will apply for all season long. This trip is always worthwhile so we can iron out some things and learn. That is what we did. We went with the safe bet on tires and Uncle Brett (Hearn) just came out of nowhere. Hats off to them guys. We’ll take it, learn from it and move on.”

Friesen was good on the shorter runs but once the race stayed green he was a sitting duck out in front as he lost the tires on his Teo Pro Car.

“We were good, good, good, but on that long green flag run we just over heated the right rear,” he said. “Brett had a hard (tire) on there and we were just hanging on there at the end. We burned it up.”

Sheppard’s third place finish was enough for him to claim the championship. He battle Friesen for the final five laps and nearly pulled off the last lap pass for second. Although he was denied the position he enjoyed his second career DIRTcar Nationals title. His last came back in 2010.

“We had an awesome race car all week,” said Sheppard. “We had another good car tonight. Brett snookered us on tires a little bit. We were really coming on Stewie there at the end. I couldn’t be prouder of all those guys standing over there that stepped up to help out. To come down here out of the box to have a first, second, third and a fifth is pretty good, pretty consistent. Hopefully we can keep it going all season.”

Fuller faded back to bring his No. 19 home in the fourth position and Danny Johnson came from 12th to complete the top five.

Billy Pauch was again the fastest car at the speedway in time trials with a lap of 17.125. Once again that was the fastest lap of the week. Dippel, Sheppard, Pauch and Friesen each earn heat wins while Hearn and Billy Dunn split the consolations.

With the conclusion of the 2016 DIRTcar Nationals the Super DIRTcar Series now shifts north to New York. The next event is scheduled for Saturday, April 30, at the Fulton Speedway in Fulton, N.Y. 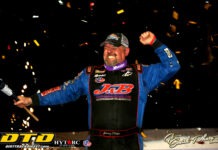 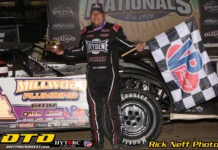 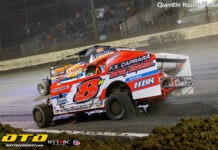