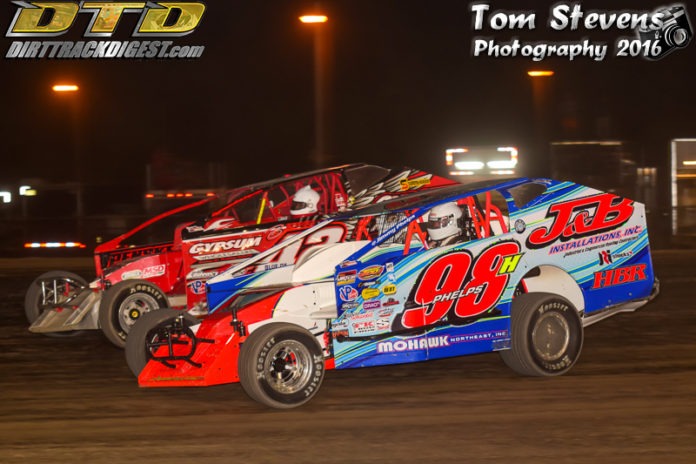 After opting out of DIRTcar Nationals in 2016, one of the most notable Super DIRTcar Series Big-Block Modified teams will be going all out come February.

The Heinke-Baldwin Racing (HBR) team includes driver of the No. 98h Jimmy Phelps and driver of the No. 6h Max McLaughlin. Both drivers of the HBR stable will be making their first appearance of the season at the fast half-mile clay oval at Volusia Speedway Park, February 22-25.

Phelps’ Crew chief, Kurt Wiegel, is looking forward to getting back to Volusia. “We took a break from it,” said Wiegel about the 2016 DIRTcar Nationals. “We were doing a bunch of testing this time last year instead of going to Florida.”

It was this time last year when 16-year-old McLaughlin, of Mooresville, N.C., made the move to run with HBR. “We thought it would be a good idea to go down and race with Max being onboard for a full year. Everyone’s here, and we’re all working together, so we’re looking forward to going down there,” said Wiegel.

Wiegel and the HBR team feel that DIRTcar Nationals is a great time to work through any kinks or adjustments that need to be made before racing kicks off in the Northeast.

McLaughlin’s youthfulness and talent have sparked much interest throughout the past year as he wrapped up his first full season, finishing 13th overall in the championship point standings. Although this year will be his first time appearing at the track in a Big-Block Modified, McLaughlin is confident heading into DIRTcar Nationals.

“Volusia is one of my favorite tracks,” McLaughlin said. “I ran a UMP Modified there the last two years. We were one of two cars in the top-10 every night last year out of eight nights. Laps on the track help being able to know when the track will change. I’m just looking forward to going down there and having some good runs.”

Teammate Phelps is looking forward to getting back on the race track after a long winter break. “It’s nice to take a little bit of a break when the season ends, but once you sit down you’re itching to go again,” Phelps said. The driver from Baldwinsville, N.Y. closed out his 2016 season with two Series wins and a seventh-place finish in the championship point standings.

Phelps is one of the few Super DIRTcar Series drivers who have yet to win at Volusia. “I’ve probably been down [to Volusia Speedway Park] a handful of times,” said Phelps. “These guys are the best. You get down there, and it’s a Series race, plus you get some really good guys that don’t follow the tour, so it’s hard to win. The track is challenging.”

The HBR team is eager to get their hands dirty at DIRTcar Nationals.