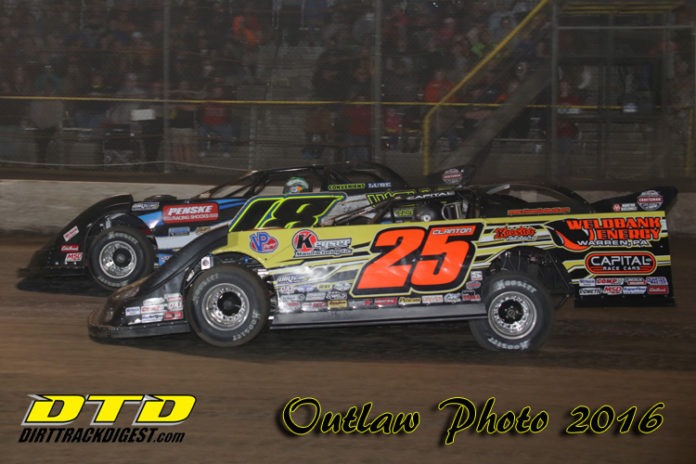 CONCORD, NC – This time next month a new season will be underway for the World of Outlaws Craftsman® Late Model Series. For the third year in a row the series will kick off at Screven Motorsports Complex on February 17-18 before the real madness begins at the 46th annual DIRTcar Nationals at Volusia Speedway Park.

Coming off of a three-month break from the series, the first two weeks of racing is one of the toughest tests of the year. The start of the season will be a vital test of mental and physical strength and stability as the drivers will face nearly 250 laps of feature races between the first drop of the green flag at Screven Motorsports Complex and the last wave of the checkered flag at DIRTcar Nationals. Some drivers may break under the pressure resulting in backing out of running full-time; while some drivers may succeed and decide to join the series for the rest of the season. There are a lot of unknowns heading into the first two weeks of the season, but that’s what makes the trip to Florida in February that much more exciting.

For the last two seasons the driver that took home the Big Gator trophy at DIRTcar Nationals also claimed the championship title when World Finals rolled around at the end of the year. In 2015, that person was Shane Clanton, a full-time series driver since 2005.

“If you come out of Florida on top then it’s easy to stay on top, if you come up behind then it’s hard to dig yourself out of that hole. It’s important to have a good run because it will boost the whole season and [at this point] who knows who will be running good. Hopefully I am still as good as I was last year and the year before. That way everyone will be chasing after me instead of me chasing them,” said Clanton.

The 2016 season was dominated by Josh Richards in the Rocket Chassis House Car. He claimed the Big Gator and the championship title last year along with 18 series wins over the course of 40 races. For 2017, the Rocket1 will be sporting a new driver, Brandon Sheppard. The series has also added some other crucial late model drivers to the mix, including Chris Madden, Devin Moran and Donald Bradsher.

“I’ve run SpeedWeeks for three or four years now and I’ve entered every race every year I’ve been here. As a driver I’m pretty focused and ready to go and as a team we are more prepared than I have ever been. It’s the first point you get to start off the season right. You can come back from a deficit if you have to but it’s a lot easier if you start off running really well and start gaining a lot of points at the start off the year,” said Sheppard.

The full-time series drivers can be nearly split down the middle. On one hand you have the hotshots, the drivers who have years-and-years of experience; including Clanton, Chub Frank and Rick Eckert. On the other hand you have the young guns, the guys that are chasing their dreams and in the midst making a name for themselves in the sport; these drivers include Billy Moyer Jr., Tyler Erb, and Eric Wells. Unlike many other sports, however, at the end of any given night, both ends of this spectrum have a chance at taking the checkers.

The historic DIRTcar Nationals is the most accessible motorsports event during the Florida in February jaunt featuring 12 action-packed days of racing among multiple series. Every ticket is a pit pass, so fans can get up close and personal to all the action and meet their favorite drivers from each of the competing series below.

Tickets for DIRTcar Nationals start at $20 and are on sale now. Save your spot at Volusia Speedway Park by calling 844-DIRT-TIX (347-8849), or by visiting http://www.DIRTcarNationals.com.

Visit http://www.DIRTcarNationals.com for the latest news and information from the event. Follow DIRTcar Nationals on Twitter at http://www.Twitter.com/DIRTcarNats.