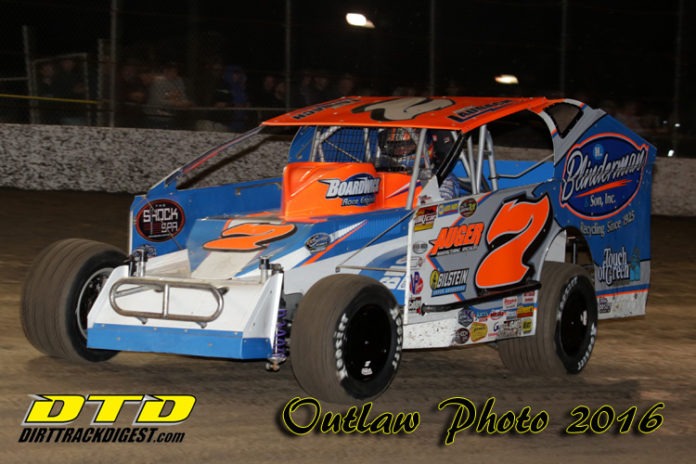 CONCORD, NC – The Super DIRTcar Series season will kick off with the DIRTcar Nationals, Feb. 22-25 at Volusia Speedway Park, with more than 35 Big-Block beasts soaring on the famed half-mile, battling side-by-side for four straight nights, all competing for the famed “Big Gator” trophy.

The best wheelmen in the business will meet to compete for bragging rights and take home the DIRTcar Nationals title. Two potentdrivers in particular look ahead as they will face off once again for one of the Big-Block Modifieds’ most coveted trophies.

Series veteran Billy Pauch, hailing from Frenchtown, N.J., was the fastest car at Volusia Speedway Park in time trials every night in 2016. But it was Quakertown, Pa.’s own Rick Laubach who held off the Series regulars, capturing the gator during last year’s DIRTcar Nationals.

Some may see the DIRTcar Nationals as an ‘invaders vs. regulars’race, where outsiders come to take the Super DIRTcar Series regulars’ money. Laubach and Pauch, who are not Series regulars, feel otherwise.


“Down there I feel like I am kind of a regular,” Laubach said. “We don’t go there all the time. It’s not like going to Brewerton or Canandaigua; it’s Volusia. I go there just as much as they do. I remember talking to Tim Fuller, and he said it took him ten years to win down there. I put my time into Volusia with them, so it’s sort of like a home track in a way. I feel like it’s more equal.”

Pauch is on the same page with Laubach, as he strongly feels that Volusia is neutral ground for everyone because it is not a weekly track.

“We go down there once a year,” Pauch said. “It’s a matter of how many years you’ve been there to have the most experience. If you put that down in years [Brett] Hearn has the most. So he probably has the most advantage of anyone because he’s run there the most.”

To win at Volusia is a triumph to all. Pauch has five Big-Block victories at Volusia Speedway, over 720 career wins overall and still believes taking home a gator would be special to him.

“It’s tough,” Pauch said. “You usually have a pretty good field down there. A lot of good guys go down. Normal racers don’t take a vacation, so that’s what they consider a vacation – going to Florida to race. It would be real special to get a gator.”

Laubach, who has three Volusia victories under his belt, feels that the compotition is what makes winning Volusia so notable. “It’s the best,” said Laubach. “It’s [Matt] Sheppard, Hearn and the DIRT guys, so it is the best feeling to win down there.”

To Laubach and Pauch, Florida in February is much more than just your typical night of racing.

“It’s SPEEDWEEKS, and it is special in Daytona during that time of the year,” Pauch stated. “You get to see a lot of people from the big track that you wouldn’t normally get to see come over at night, so it’s usually a good time.”

“We don’t really go anywhere else on vacation,” Laubach said. “We get up early, get the car done, and go to the beach until about four o’clock, get in the truck and go to the track like a regular night.”

DIRTcar Nationals is well known for the number of drivers who take the trek south during the winter to cure their winter blues and get a little dirt under their belt. To name a few of the dauntless invaders who competed against the notorious Super DIRTcar Series regulars in 2016: Laubach, Pauch, Erick Rudolph, Tyler Dippel, Billy Dunn, Alan Johnson, Jamie Mills, H.J. Bunting, Vic Coffey, Billy VanInwegen, and Jessey Mueller.

This 12-night event brings some of the biggest names in motorsports to the famously fast, half-mile. Some believe it’s a place for drivers to settle a rivalry; but most agree it’s neutral territory where those who make the trip south can get away from the winter weather and compete for the coveted Big Gator trophy.

ABOUT THE TRACK
Volusia Speedway Park is a half-mile, high-banked, clay oval located in Barberville, Florida. The track opened as a ¼-mile oval in 1968, which then expanded to a 3/8-mile in 1969 and then once again expanded to a half-mile in 1972. The clay oval was paved in 1989 and was then converted back to dirt in 1997 and has been dirt ever since.