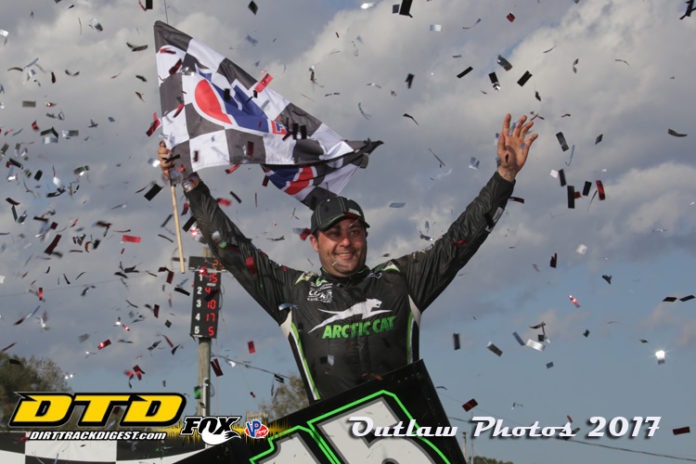 BARBERSVILLE, FL – It is not unusual for two series champions to face-off in the 46th Annual DIRTcar Nationals at Volusia Speedway Park. In the first show of a Sunday double-header, eight-time World of Outlaws Craftsman® Sprint Car Series Champion Donny Schatz revisited his fierce battle with Arctic Cat All-Star Circuit of Champions titleholder Chad Kemenah. Like the Wednesday night thriller – starting in the first row with Kemenah – Schatz again established himself as the best-of-the-best between the two series.

But it did not come easily for the Fargo, N.D. native, who has now won a DIRTcar Nationals show every year since 2011. On Friday night Schatz finished 14thin the feature, his worst finish since the series opener last season (when he placed 18th). But Schatz said one major adjustment was opting for a harder tire.

“We did make some tire changes today and went with a harder tire,” Schatz said. “I think it hurt us early in the race, but they don’t pay for the first lap they pay for the last. The driver just showed up today with an attitude. I guess you could say he made all the mistakes in one night (Friday).”

Once the green flag was waved, Schatz overtook Kemenah and extended his lead to nearly one second. Kemenah reclaimed his spot before the race’s first caution on the ensuing restart. In the race’s most exhilarating exchange, the two danced around each other – inversely switching lines high and low. Schatz was the first to take the lead, wedging his car under Kemenah’s in the second turn. Kemenah used the back-stretch to regroup, and butted his left-front tire nearly up against the inside wall in turn three for first position.


On Lap 14, strategy played to Schatz’s favor. Schatz made the decision to start on the inside of the race’s second caution – as the two made their passes on the bottom earlier. Schatz was successful on the restart. Kemenah dropped off Schatz’s pace – nearly two tenths faster than the field with each lap. This left the door open for Friday night’s winner Jason Johnson to slip by Kemenah and secure a second-place finish; Kemenah settled for third.

Like Schatz, David Gravel also underwent a roller-coaster of a week. Gravel won Thursday’s All-Star finale, but since has blown four motors. Expending his reserve, CJB Motorsports sent for three new motors to be shipped to Volusia. Gravel said race engines “eat dirt every day,” so self-inflicted malfunctions are bound to happen.

On his fifth Kistler motor, Gravel turned-around Friday’s last place finish by first setting Sunday afternoon’s quick time with a 13.453. He carried that momentum to his heat race, doubling on his successes. A small scare in the Craftsman® Club Dash when he got into the turn two wall. Escaping with only minor damage this was the only hiccup Gravel had throughout the show, ultimately collecting his first World of Outlaws top-five performance of the year.

“When that fifth motor is good enough to quick time, it speaks to how good our engine program is,” said Gravel, who added that he never lost doubt in his Kistler Engine package. “We never give up. We screwed up a little in the dash, but we just kept looking forward. There’s no reason why we can’t win tonight.”

With the victory, Schatz can become the first Outlaw since Jeff Swindell and Sammy Swindell to win multiple series races in one day. Jeff Swindell first accomplished the one-day sweep at Rolling Wheels (N.Y.) Raceway Park on October 8, 1994. Sammy Swindell matched his brother’s feat in 1999 at Bloomington Speedway.

RACE NOTES:Donny Schatz wins a World of Outlaws Craftsman Sprint Car Series race at DIRTcar Nationals for the fourth consecutive year. After fending off Chad Kemenah – who led the 26-car feature into the green flag – Schatz nearly opened-up a two second lead. Jason Johnson, who won the previous show, caught up to Kemenah and took second place in the closing laps.