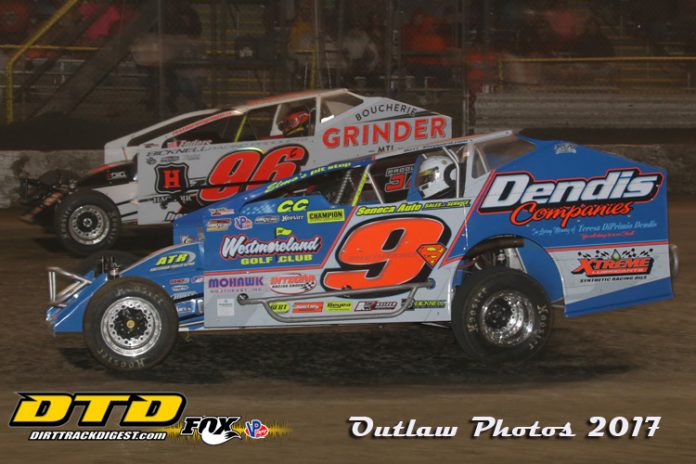 CONCORD, NC — Each February Volusia Speedway Park kicks off the racing season with the highly anticipated DIRTcar Nationals. The Super DIRTcar Series competitors of the Northeast will once again make the long haul to Florida, stretch their legs, and thaw out their Big-Block Modifieds to prepare for the 2018 campaign. The fast and furious high-banked half-mile oval hosts the Super DIRTcar Series for an extra night in 2018 with five consecutive nights during the second half of DIRTCAR Nationals, from February 13 -17.

Super DIRTcar Series veterans Brett Hearn, Billy Decker and Pat Ward will be vying for the coveted Big Gator trophy against young guns like Larry Wight, Max McLaughlin, and defending Series Champion Matt Sheppard. Since 1998 Brett Hearn has earned the most Feature Big-Block Modified wins (10) at Volusia Speedway Park. However, 2017 was far from a banner year for The Jet. Although Hearn picked up that elusive 900th win and his first Series victory in two years, the Sussex, N.J., driver, unsatisfied with last season’s fortunes, hopes to reverse them with a strong showing at the 2018 DIRTcar Nationals.

Billy Decker, in his second year with a new team, proved he still had the winning touch with four Feature wins, but in a battle that came down to the final race, the Unadilla, NY driver fell just short of securing his fourth Series championship. After many years of success in the familiar red Gypsum Racing cars, the Mike Payne-owned Page Trucking Modified team fell into a groove in 2017 with wins at Fulton, Outlaw, Brockville, and Eldora speedways. There is no doubt that Decker will pick up where he left off last year and be a threat at Volusia.

The Gypsum Racing 42p of veteran Pat Ward will take on the fast Volusia track as well. Last year Ward was a picture of consistency, securing nine top-five finishes. The famous 42p has visited Victory Lane at Volusia Speedway Park multiple times, making Ward one of the favorites to run up front again in 2018.


Super Matt Sheppard, coming off one of his best seasons, will launch a defense by once again getting dialed in for the 2018 season at Volusia. Not only did Sheppard take home the 2017 Super DIRTcar Series Championship, but he also made a last-lap pass for his second career Super DIRT Week win — his first at The Clay Palace Oswego Speedway. Later in October Sheppard took the final Feature event of 2017 in Charlotte. If it’s momentum you want, Super Matt Sheppard has got it.

The 99L Gypsum Racing entry piloted by Lightning Larry Wight is another hot hand to keep an eye on in Florida. Wight has developed an edgy reputation because of his aggressive, high-line, cushion-slamming racing style. In recent years Wight has combined consistency with quickness and was rewarded third place in the Series standings in 2017. Wight took the checkered flag twice last year and hopes to continue his winning ways at this year’s DIRTcar Nationals.

Young gun Max McLaughlin in the Heinke Baldwin Racing, Textron Off Road 6H car picks up speed with every race he enters. McLaughlin finished 8th in points and had 13 top-ten finishes in 27 Super DIRTcar Series starts. McLaughlin looks to continue to carry his family name into Victory Lane in 2018 beginning with the DIRTcar icebreaker in Florida.

The ever-energetic Billy Whittaker is looking to build off last year’s run at Eldora and park the No. 109 in Victory Lane during the 2018 season. Whittaker who had some strong runs in 2017 will be hoping to feed off that momentum and kick off 2018 on a strong note by capturing a gator at DIRTcar Nationals at Volusia Speedway Park.

Attempting to chase the Super DIRTcar Series tour in 2018 will be Erick Rudolph out of Ransomville, N.Y. The 26-year-old seems like he’s be around forever, that’s because he’s been racing anything, anywhere throughout his young life. Last year during the two shows that the Big-Block Modifieds were able to get in at DIRTcar Nationals, Rudolph had two impressive runs with a fifth and sixth-place finish, giving the young gun high hopes of raising the Big Gator on Saturday of the second week.

Coming off a pair of top fives, including a second-place finish to close out the season at The Dirt Track at Charlotte Motor Speedway, Keith Flach and the No. 43 team may have hit on something. The fire is burning in the young driver out of Ravena, NY to capture his first victory.

Tickets are still available. Visit dirtcarnationals.com for tickets, the daily schedule, and information about all the other exciting racing taking place at Volusia Speedway Park including the World of Outlaws Craftsman® Sprint Cars and Late Model Series.