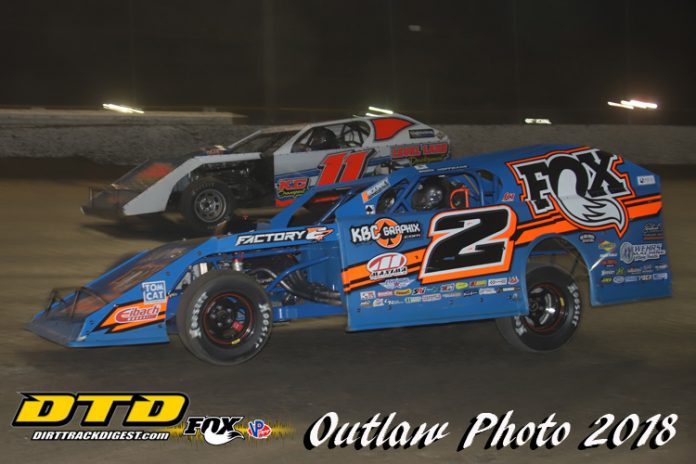 BARBERVILLE, FL – The 47th annual DIRTcar Nationals continued on with night number three for the DIRTcar UMP Modifieds at Volusia Speedway Park (FL). With 70 cars on hand, every position, every time the cars are on the track, is of the utmost importance. That was certainly the case on Thursday, February 9th in the final regular night of competition before the specials portion of the schedule for the Modifieds kicks in. The Thursday night 20-Lap Feature would see the first two nights’ winners, David Stremme and Nick Hoffman tied in Gator Points coming into the night. When the checkered flag flew, it’s now Hoffman standing alone on top of the points after winning his second Feature in a row.
“It doesn’t hurt to start up front that’s for sure. I’m not a huge fan of it, but it worked out tonight.” Smiled the 25-year-old originally from Belleville, IL after climbing from his #2 Fox Shocks / Elite Chassis ride. “Our program is really good right now. It all comes down to maintenance and we’ll just keep doing what we’ve been doing for the past two days. A bunch of seconds and now two wins in a row. Biggest thing tonight was getting out front and getting away from everyone and it worked out.” The Mooresville, NC resident added.
Hoffman and Tyler Nicely were scheduled to start on the front row, but Nicely didn’t answer the call for the start. So that moved up Mike McKinney to the outside of the front row. On the start, it was Hoffman who shot out to the early lead as the rest of the field jockeyed for position behind him. The battles between second through fifth was intense before Kyle Strickler finally emerged from the war, into second and set his sights on Hoffman, who had built up a big lead.
As hard as Strickler ran to try and catch the race long leader, Hoffman was able to put plenty of real estate and lapped cars between the two. Strickler was able to finally get through the traffic and tried to track down Hoffman late in the race, but the lead was too insurmountable as Hoffman took the checkered flag first by just over a second to score his second straight win and 13th DIRTcar Nationals victory of his career in a caution free event.
Strickler advanced one position from his finishes the first two nights and secured the runner-up spot ahead of McKinney who scored his highest finish of the week. NASCAR Xfinity Series star, Justin Allgaier and former NASCAR veteran, Kenny Wallace completed the top five. Allen Weisser finished sixth for his best finish of the DIRTcar Nationals and second top 10 while night number one winner, David Stremme was seventh. Zeke McKenzie grabbed eighth as Will Krup finished ninth for the second straight night and Brian Ruhlman posted his best finish of the week and finished off the top 10.
The DIRTcar UMP Modifieds continue to add to their ironman status of the 47th Annual DIRTcar Nationals on Friday, February 9th as their fourth straight night of racing will be highlighted by the Quad-15s. Four Features are on the card as every Modified driver on hand in Barberville, FL will race in a DIRTcar Nationals Feature. The World of Outlaws Craftsman Sprint Car Series arrive on Friday and headline the rest of the weekend with their first of three straight nights racing.
For more information about the 47th annual DIRTcar Nationals and to order tickets, please call: 1 (844) DIRT-TIX or log onto the DIRTcar Nationals website located at: dirtcarnationals.com. You can also follow the DIRTcar Nationals by visiting the Social Media outlets.
Abbreviated DIRTcar UMP Modified Results from: DIRTcar Nationals Night Three
Feature (20-Laps): 1.Nick Hoffman (2) 2.Kyle Strickler (8) 3.Mike McKinney (96m) 4.Justin Allgaier (7) 5.Kenny Wallace (36) 6.Allen Weisser (61) 7.David Stremme (35) 8.Zeke McKenzie (24z) 9.Will Krup (K9) 10.Brian Ruhlman (49) 11.Kc Burdette (44KC) 12.Jason Beaulieu (90) 13.Matt Crafton (88) 14.Ricky Arms (4) 15.Ken Schrader (9) 16.Larry Burkins (54) 17.Shon Flanary (98) 18.Troy Johnson (2J) 19.Ryan Cripe (23) 20.Ryan Ayers (6A) 21.Austin Holcombe (8A) 22.Josh Rice (11) 23.Chase Collins (2×4) 24.Jesse Rupe (11R) 25.Ryan Fowler (6F) 26.Dave Jamison (D4) 27.Michael Long (18L) 28.Tyler Nicely (25)