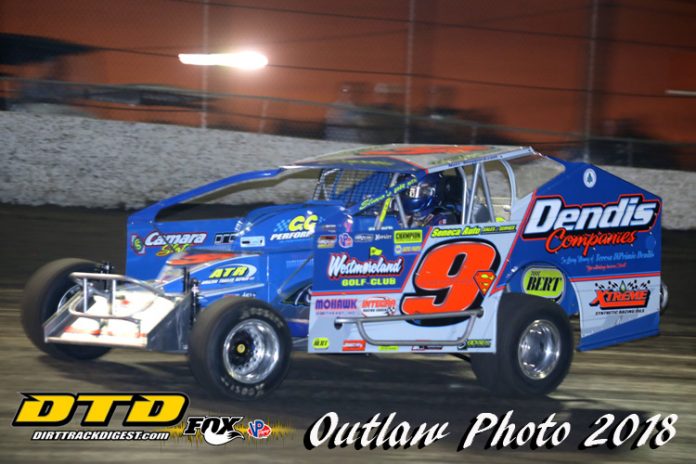 BARBERVILLE, FL – Matt Sheppard struggled in the first feature of the DIRTcar Nationals dropping out of the event on Wednesday.  In the nightcap he ended up driving his way up to sixth place finish.  On Friday he put everything back the way it was in 2017, he parked the No. 9s in Victory Lane.

“A win here means a lot,” commented Sheppard.  “We travel all the way down here and we do it all for a Gator. Congrats to Tyler (Siri) and Timmy (McCreadie) on their wins, because getting a Gator is what its all about.”

Danny Johnson took advantage of his pole starting spot, rocketing out to the lead at the beginning of the 30-lap Super DIRTcar Series event. By lap two, Matt Sheppard had slipped past Larry Wight for the runner-up spot, with Max McLaughlin following through for third.

Johnson had opened up a solid lead of about one second in the opening handful of laps, but Sheppard never let the Johnson get too far out. As the drivers settled in, the vast majority of the field had migrated to the bottom of the slick and hard racing surface. With laps ticking away, Sheppard slowly began to chip into Johnson’s lead, closing to within three car lengths by lap 10.

On lap 16, Johnson moved to the top of turn one to pass the first slower car, but this proved to be the wrong move, as Sheppard quickly filled the hole Johnson had vacated in the preferred lane. By the time the leaders reached turn three, Sheppard had cleared Johnson for the top spot.


Behind the top two, McLaughlin was very busy defending third from Tim McCreadie and Justin Haers. Lap after lap, McCreadie poked his nose high and low trying to find a way by McLaughlin, but would always need to tuck back in line to play defense himself on Haers. While the trio battled for third, Sheppard was walking away from Johnson.

Over the final 14 laps, Sheppard slowly but consistently expanded his advantage over Johnson, cruising to his first win of the year and his seventh as part of the DIRTcar Nationals.

“You know, I kind of put my guys through hell coming down here,” Sheppard stated in victory lane. “There was a bunch of stuff I wanted to try, but we abandoned ship and went back to our old stuff. This car hasn’t seen the track since Charlotte, and it didn’t miss a beat.”

Johnson finished second putting in a very good spot in terms of points entering the final night, looking poised to make a run at the DIRTcar Nationals championship with his new team.

“Hats off to my crew for doing a great, fantastic job getting this car ready,” Johnson said. “We probably should have won the race, but we didn’t. I’m just happy to be here in a podium spot. I tried passing the lapped car up top, but that was a total mistake. It didn’t take long for Sheppard to get there, and from there he just took off.”

After disappointment last night, McLaughlin picked up a third place finish. Even then, he was not totally satisfied.

“We picked the wrong tire,” noted McLaughlin. “We picked a D300, and the guys in front of us had a D400. I was about 40% throttle all race just trying to keep the tire under me. We definitely would have had a better shot at it tonight had we went with the harder tire.” 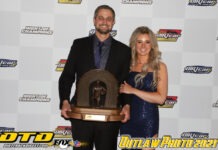