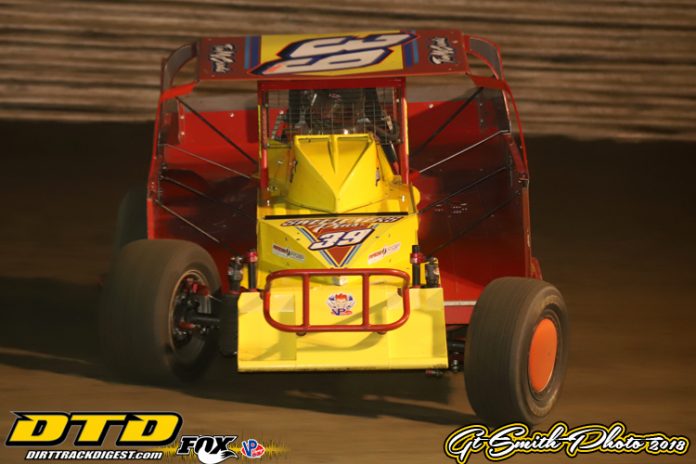 BARBERVILLE, FL – It looked like a long shot for Tim McCreadie to get a win in the final event of the DIRTcar Nationals for the Super DIRTcar Series Modifieds.  McCreadie was forced to take a provisional starting position to make the 50-lap finale at the Volusia Speedway Park to start on the inside of the 14th row.

When the feature got rolling, the Watertown, N.Y., driver picked them off one at time with Stewart Friesen being the last in the closing laps to score the improbable $5,000 victory.  That also earned him the Big Gator trophy for his first DIRTcar Nationals Modified Championship.

“This is amazing,” an ecstatic McCreadie said in victory lane. “Like I said early in the week, I don’t have the time to give Vic (Coffey) and the guys the right feedback because its so hard to run two divisions here. I love doing it, but I might forget how hard that was and try it again next year.”

Tyler Siri looked to continue his success from opening night, taking control of the field in the opening laps from his front row starting spot. Billy Decker, who has had a dismal week by his standards, slotted into second early while Friesen climbed to third.

With five laps in the books, both Decker and Friesen began putting heavy pressure on Siri for the lead, with Friesen then taking second from Decker. However, Siri picked up speed and began to pull away from the pack.


While much of the front-runners found comfort on the cushion, Mike Mahaney was making progress on the bottom. With 12 laps completed, Mahaney cleared both Jimmy Horton and Decker to move up to third.

Meanwhile up front, Stewart Friesen also found the bottom, passing Siri and taking the lead. As Friesen made the pass, the first caution flag of the race flew, but Friesen had been credited with the lead at the line and kept the position.

With 19 laps completed, the brawl for fifth through ninth came to a close. Horton had mechanical issues on the frontstretch, while Larry Wight’s run from the consolation event came to a close after biting the cushion and catching the wall. Siri got shuffled on the restart, as Decker, Mahaney, and Sheppard all went past.

At halfway, Friesen was clearly the man to beat, stretching out his lead over Decker and Mahaney.

As Mahaney and Decker remained side-by-side for second, a number of cars were charging from the rear. McCreadie, who entered the night just ten points ahead of Danny Johnson in the points battle, had climbed from the 27th starting spot to seventh, while Billy Pauch had worked up to sixth.

Siri’s run came to an end on lap 31, slowing on track and drawing the yellow. Just before the caution lights turned on, Matt Sheppard had joined Mahaney and Decker in the fight for second.

Friesen didn’t get the best restart he had all night, and Mahaney and Sheppard took advantage. The three raced three abreast for the lead, but Friesen was able to narrowly hang on.

McCreadie then rocketed by Sheppard for third and appeared to be ready to walk past Mahaney for second, but a yellow for Justin Haers slowed the pace again on lap 32.

On the restart, Pauch flew past Sheppard for fourth, and McCreadie put the foot to the floorboard and blew past Mahaney for second on lap 35.

With 10 laps left, McCreadie was closing on Friesen as both drivers railed the berm on the top of the speedway. As the duo entered lapped traffic, McCreadie saw his chance to make his move, launching off the bottom of turn four to take the lead with five laps left.

McCreadie slid past Friesen as the crowd went ballistic and quickly began to pull away. He ran the last five laps flawlessly and charged to his second win of the week and the DIRTcar Nationals title.

Friesen led much of the main event, but fell just short of his first win of the year.

“Yeah, we had a great car, the whole crew worked really hard all week,” a disappointed Friesen noted. “I’m not going to sit here and piss and moan about it, because it was a heck of a race. McCreadie just got a couple of breaks in lapped traffic, found the bottom in turns three and four and that was it. Great guy, great to race against. It sucks, but it was a good run for us.”

Mahaney ran the best he had all week in the 50-lap finale, claiming the final spot on the podium with a third.

“We stepped up a little every night and just kept getting a little better,” Mahaney stated. “Its been a long week, working on and washing cars every day. I’m just really thankful to do this and we’ll come back next year.”
Pauch was able to finish in fourth from the 16th starting position while Godown came on late to finish in position number five.