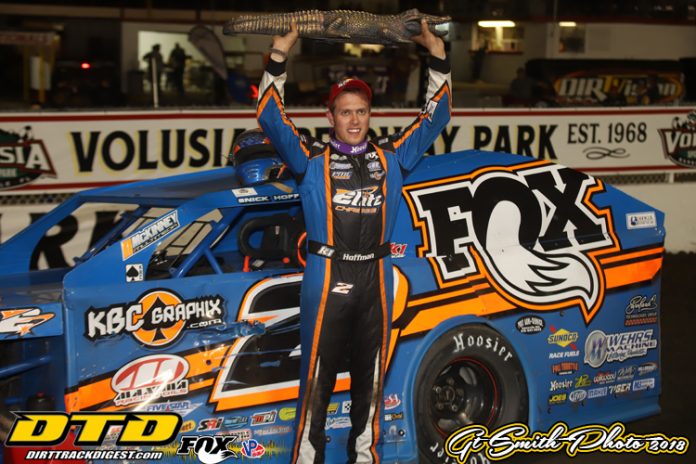 BARBERVILLE, FL – As usual, the DIRTcar UMP Modifieds will kick off 12 straight nights of racing at Volusia Speedway Park on Tuesday, Feb. 5. The busiest division in Florida during the month of February, and perhaps the most competitive of all, will take on the legendary half-mile, high-banked dirt oval for seven straight nights from February 5-11. The UMP Modifieds will race in 10 total features in the chase for the 2019 DIRTcar Nationals title while celebrating their 15th year at the event.

Over the past 14 years, the UMP Modified division has produced 46 different feature winners along with 10 different champions. Car counts have averaged in the 70s with 111 feature races conducted. Only three drivers have captured more than one championship, and it wasn’t done for the first time until 2013, when NASCAR legend Ken Schrader accomplished the feat.

No driver, though, has been more successful at DIRTcar Nationals than three-time defending Champion Nick Hoffman. The 26-year-old has ascended to the status of “Best Gator” with a record 14 wins. The Mooresville, NC resident scored his first ever DIRTcar Nationals feature on February 20, 2012, the inaugural Gator Championship night, and the first of what would be three Gator Championship night wins for him.

Single victories in 2013 and 2015 set the stage for the past three seasons of domination by the driver originally from Belleville, Illinois. Four feature wins each in both 2016 and 2017, as well as three more in 2018 have propelled the driver of the popular #2 Elite Chassis entry to the last three DIRTcar Nationals titles.

“Man, this is so awesome. To win a Big Gator is pretty special no matter how many times you do it,” said Hoffman on stage at Volusia in 2018 after winning his third consecutive DIRTcar Nationals title. “These championships are so hard to come by, and to be able to do it three years in a row says a lot about this car and this team. There’s so many people that make this happen, and I truly can’t thank everyone enough.”


Hoffman stands alone as a three-time DIRTcar Nationals champion in his division. Only Schrader (2008 & 2013) and NASCAR shoe Ty Dillon (2012 & 2014) have more than one DIRTcar Nationals title. Seven other drivers have single championships.

The 2018 battle for the Big Gator was a good one between Hoffman and Kyle Strickler. On opening night, NASCAR star David Stremme ended a winless streak that stretched back to 2015 with his second career DIRTcar Nationals victory. Hoffman responded by winning the next two nights. A pair of first-time feature winners emerged in Larry Mott and Frank Paladino; Tyler Nicely ended a two-year drought with a feature win; and Strickler closed out the busy schedule ending another three-year winless streak with his first Gator since 2015.

Big Gator Qualifier nights would see Nicely strike first with his second feature win of the week and third of his career, while Hoffman bagged win #3 and career victory #14 the next night. On the final night of competition, Strickler stopped Hoffman’s bid for a third straight Gator Championship night win by scoring the final night feature payday, his second feature win of the week and fourth overall of his career. However, Hoffman had accumulated enough points over the seven straight nights of racing to secure his third straight overall championship.

Heading into the 48th annual DIRTcar Nationals, Hoffman will once again lead the charge, with plenty of competition from two-time 2018 feature winners Strickler and Nicely. With a single win in 2018, Stremme will look to add to his totals and chase after his first DIRTcar Nationals title, while Clarklake, MI veteran Brian Ruhlman, who went winless in 2018 after collecting single victories in 2017 and 2016, works to end a mini-slump and compete for his first championship at Volusia.

Two former NASCAR stars who always make life difficult for the UMP Modified contingent are Schrader and Kenny Wallace. Schrader has two career victories at the DIRTcar Nationals, but it’s been a long time — six years to be exact — since the two-time DIRTcar Nationals Champion (2013 & 2008) took the checkered flag. It’s been even longer for Wallace. After his three-win year of 2012, the Arnold, MO veteran has gone winless at Volusia but is still tied for seventh all-time in career DIRTcar Nationals feature wins with four. He shares that mark with Strickler.

NASCAR Xfinity Series star Justin Allgaier also has a single win at Volusia in 2016, and he would love to snap that skid as his Daytona schedule allows. Two-time NASCAR Gander Mountain Truck Series Champion Matt Crafton has made infrequent appearances at Volusia over the years and is still in search of his first Gator. So is Stanley, NC rising star Taylor Cook, a two-time winner in the Summit Racing Equipment Modified Nationals, as that elusive first Volusia victory has also, so far, eluded him.

After DIRTcar Nationals, the UMP Modified teams turn their attention to the remainder of the 2019 racing season and the widely popular Summit Modified Nationals.

Tickets for the 48th Annual DIRTcar Nationals can be purchased here. 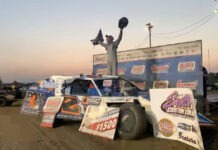 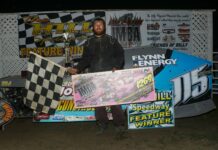 Third Time’s The Charm For Sites