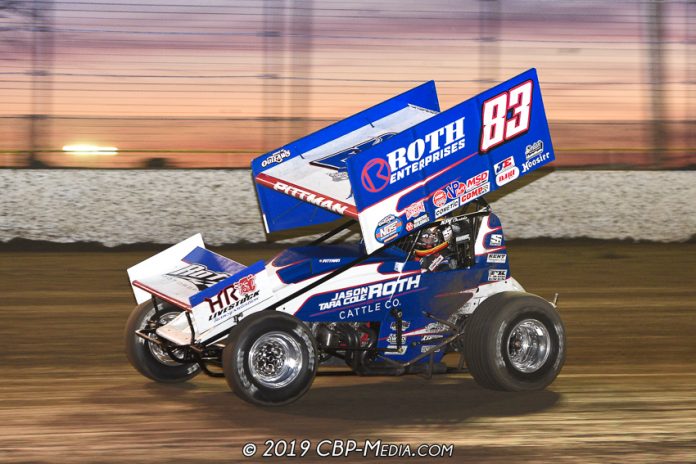 0BARBERVILLE, FL – Daryn Pittman is no stranger to winning at Volusia Speedway Park. However, when he pulled his Sprint Car into Victory Lane during the opening night of the World of Outlaws NOS® Energy Drink Sprint Car Series at the DIRTcar Nationals it was like a first win.

NOS Energy Drink dawned Victory Lane for the first time as the new title sponsor of the Series, but the biggest change for Pittman was the car he drove to the win – the legendary Roth Motorsports No. 83.

“There is nothing better than starting the year off with a win,” said Pittman, who won for the 82nd time in his World of Outlaws career. “It’s hard to do. Everyone of these wins is hard to come by. But to start the season off like this, I don’t think we could have scripted it any better.”

For the past six years, Pittman drove the No. 9 for Kasey Kahne Racing – winning his only Series championship in 2013, his first year with the team. He lost that ride at the end of 2018, as car owner Kasey Kahne planned to run more Sprint Car races this year. Losing that ride didn’t put any more pressure on him to perform, though. The pressure is always there.

“I put enough pressure on myself every day, no matter who I’m driving for or what I’m racing,” Pittman said. “At my age (40), I’m not young anymore. The truth is, you have too many bad seasons and you get to my age, people start wondering ‘Man has he lost it or not?’. I just have pressure on myself to get out there and perform.”

Pittman added his goal with Roth Motorsports is to build a long-lasting, competitive program.

He showed speed all day, qualifying second, finishing second in his Heat Race and finishing third in the DIRTVision Fast Pass Dash – behind fellow Oklahoma-natives Shane Stewart in the CJB Motorsports No. 5 car and Christopher Bell in the Swindell SpeedLab No. 39 car, who he battled for the win during the 30-lap caution free Feature.

Stewart, who is also in a new ride this year with the CJB Motorsports team, shot to the lead on the opening lap of the Feature. He utilized the top side of the track to his advantage most of the night, holding off attacks by Bell and Pittman for the lead. He switched to the bottom of the track for a few laps, allowing Bell, on the high side, to make his best attempt to steal the lead. Bell was able to pull side-by-side with Stewart, but never able to clear him.

Bell and Pittman traded second-place a few times throughout the race. By lap 15, Pittman was able to clear Bell for second, utilizing the traction at the bottom of the track.

Sticking to the bottom, Pittman began to reel in Stewart, who had entered lap traffic. With 10 laps to go, Stewart looked to have the race under control, keeping a healthy distance between he and Pittman while maneuvering through lap cars. Until five laps later.

Coming off turn four on the high side, Stewart’s run was disrupted by a slower lap car, allowing Pittman to get underneath him in turn one, then clearing him on the backstretch. Once Pittman stole the lead, Stewart was unable to challenge for it back and had to settle for second.

“I wish I had a couple of them laps back,” Stewart said. “I got caught behind (Jason) Sides, and I wasn’t really sure what to do. And to win these races you can’t make little mistakes like that. We had a solid night. This car has been fast since I’ve set foot in it and I’m really excited about this year.”

Bell finished third, ahead of Brad Sweet in fourth and Donny Schatz in fifth. However, Schatz and David Gravel – also in a new ride this year – tied coming to the line for fifth. Schatz was awarded fifth, because per Series rules, going back to the previous lap Schatz was ahead of Gravel.

For Pittman, while he is dealing with a lot of new, Friday night’s win is the start to showing people he will be a threat to win every night, he said.

World of Outlaws NOS Energy Drink Sprint Car Series action at the DIRTcar Nationals resumes tomorrow at Volusia Speedway Park. As always, you can catch all the action from the Nationals and the World of Outlaws on DIRTVision.com.