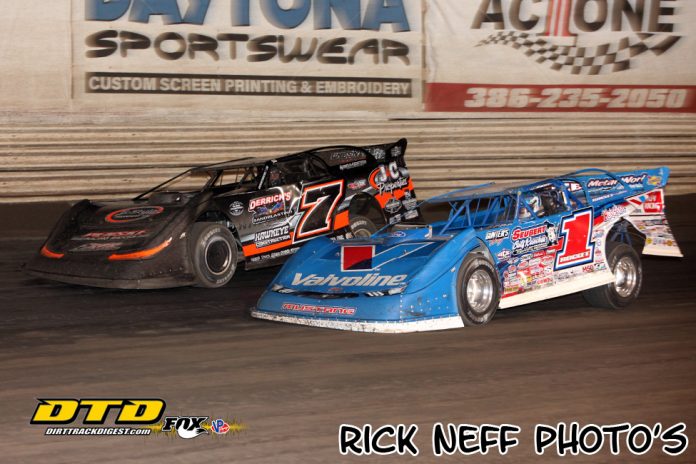 BARBERVILLE, FL – The World of Outlaws Late Model series made their DIRTcar Nationals debut on Wednesday night at the Volusia Speedway Park and it was former champion, Brandon Sheppard who absolutely dominated the 50 lap main-event to take home the $10,000 payday.

“We had a good car, we’ve had a good car all Speedweeks, we just haven’t had things go our way,” said Sheppard in victory lane.  “It’s a fun piece to drive.  We’ve got a pretty balanced race car and I’m looking forward to the rest of the week”

Sheppard and Scott Bloomquist brought the 27 car field to the green flag and right from the start it was the Rocket XR-1 machine that jumped out to the lead.  Sheppard dominated through the early stages of the race, extending his lead to well over three seconds before the first yellow flag flew with 16 laps complete for Ivedent Lloyd Jr., who slowed on the outside of turn two.

On the restart, it was another former series champion, Josh Richards who used a great restart to take the third spot away from Chase Junghans and set his sights on then second place, Scott Bloomquist.  It took the driver they call “Kid Rocket” only four laps to take his Clint Bowyer Racing machine to the bottom of turns three and four to take away the second spot from Bloomquist.

At the halfway point it was all Sheppard had once again extended his lead over Richards and Junghans, who was starting to mount a charge.  While Junghans went after Richards, Darrell Lanigan and Scott Bloomquist traded slide jobs as they battled for the fourth position.  As Lanigan went by Bloomquist, 13th place starter Don O’Neal poked his nose on the outside of Bloomquist and took the fourth position away.

The yellow flag flew once again with 31 laps complete for the No. 7 of Ricky Weiss, who brought his car down the hot pit to change a right rear tire.

As the green flag flew again Sheppard flexed his muscle and pulled way out in front again while Richards was under heavy pressure from O’Neal.

O’Neal was able to slide by using a lap car in turn 1 and then set his sights on the 1 of Sheppard, but it was too little, too late, as Sheppard cruised to his 38th WoO Late Model feature win by 1.95 seconds.

“The first win has been avoiding me for a long time it seems like,” mentioned Sheppard about Volusia.  “I think we’ve got 13 out 15 top fives so far in 2018.  We’ve got a great team and a great race car, we just haven’t had things play our way and finally things are playing our way.”

O’Neal held on for second, with Richards, Junghans and Jonathan Davenport completing the top five in the 50-lap event.