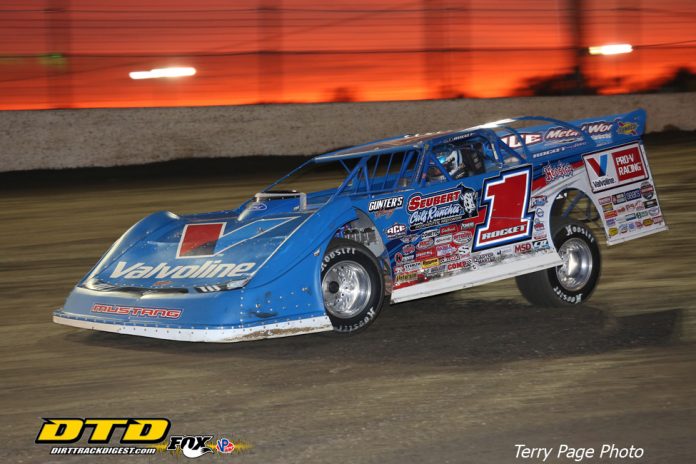 BARBERVILLE, FL – Brandon Sheppard is now two-for-two in World of Outlaw Late Models Series competition at Volusia Speedway Park as part of the DIRTcar Nationals.  Sheppard dominated the 50-lap main-event on Thursday night for another $10,000 payday.

“That thing was a lot of fun to drive,” Sheppard said. “We had the right call on tires, and at the end we started dying a little, but the car was just so good that even when the tires started to fade I was able to keep my speed up. It’s a dream to drive, we’ve definitely found our mojo and are putting full nights together.”

Tim McCreadie took command at the start of the 50-lap Late Model Series main event, with Shane Clanton and Sheppard in tow. McCreadie set the pace on the top-side of the track, but Sheppard chipped away at the gap using the middle and bottom lanes.

On lap 11, Sheppard got the run he needed and slipped under McCreadie, looking for two wins in a row.

A couple quick cautions kept the field close to Sheppard for a moment, but Sheppard planted his right rear on the Volusia cushion and took off, leaving McCreadie to hold off Chris Madden, Don O’Neal, and Scott Bloomquist.

A lap 22 slider sent O’Neal to second, and Madden looked to follow through on the bottom. By halfway, Sheppard had checked out.

As McCreadie went back after O’Neal, Sheppard’s lead stretched to over four seconds. Jonathan Davenport was a man on a mission, interrupting the McCreadie and O’Neal battle by blasting by both in one move with 16 laps to go.

Davenport’s restart didn’t go as he hoped, as both O’Neal and McCreadie went back by. Another debris caution soon after kept Sheppard in check, this time with O’Neal lining up in second.

Continuing the awesome fight for second, McCreadie slipped by for second, with Bloomquist pressuring O’Neal for third. Bloomquist quickly disposed of O’Neal, and did the same to McCreadie.

One more caution with six laps to go allowed Bloomquist a shot at restarting on the rear spoiler of Sheppard.

For the first time in a long time, Sheppard had company. Bloomquist hung close to Sheppard in the closing laps, approximately half a second behind.

However, about three car lengths was as close as Bloomquist would get, as Sheppard snagged his second World of Outlaws feature win in as many nights.

Bloomquist chased in second, with O’Neal, Ricky Weiss, and McCreadie filling out to the top five.