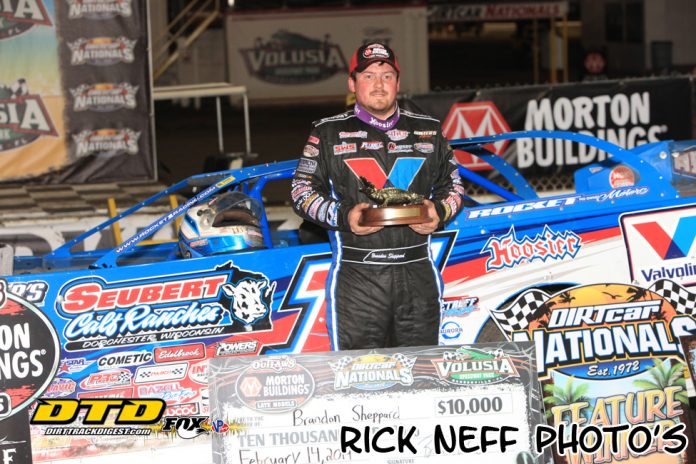 Brandon Sheppard was unstoppable over the course of four days winning all four of the World of Outlaw Late Model main-event on his way to the DIRTcar Nationals championship at the Volusia Speedway Park. On Saturday night he was unbeatable again for another $10,000 win.

“It’s unbelievable, really,” Sheppard said. “I told my girlfriend that if we won tonight we’d take the kids to Disney World, so I guess I have to live up to my word on that one. It’s awesome competition with real clean racing, so it means the world to me.”

Chris Madden rocketed out front of the 50-lap World of Outlaws Morton Builders Late Model Series main at the drop of the green, with Scott Bloomquist in second. Brandon Sheppard drove past Bloomquist on lap three, then went after Madden for the lead. Looking for his fourth win in four nights, Sheppard grabbed said lead on lap seven.

While Sheppard had a comfortable lead, lapped traffic loomed. Sheppard needed to take evasive action when a slow car ducked towards the pits, and Madden closed right up to his spoiler. Madden couldn’t capitalize and remained in second, but a lap 24 caution gave all leaders some clean track.

On the restart, Sheppard opened up a gap while Madden had to hold off Shane Clanton. Madden shook off Clanton after a couple laps, and went to work at erasing Sheppard’s one second lead. A caution allowed Madden to catch right back up, but the lap 31 restart was the same song and dance as before.

With ten laps to go, Sheppard caught the tail of the field and Madden begun to close. Just as Madden cut the gap to under a second, the caution flew for Brandon Overton’s wreck. This set up a nine lap dash, with Sheppard trying to become the first driver to sweep the World of Outlaws Morton Builders Late Model Series features at the DIRTcar Nationals.

Sheppard and Madden both went back to the bottom of the speedway, and Sheppard rebuilt the gap to over a second. After flawless final laps, it was Brandon Sheppard scoring his fourth victory in a row over Chris Madden, Shane Clanton, Dennis Erb Jr., and Scott Bloomquist.