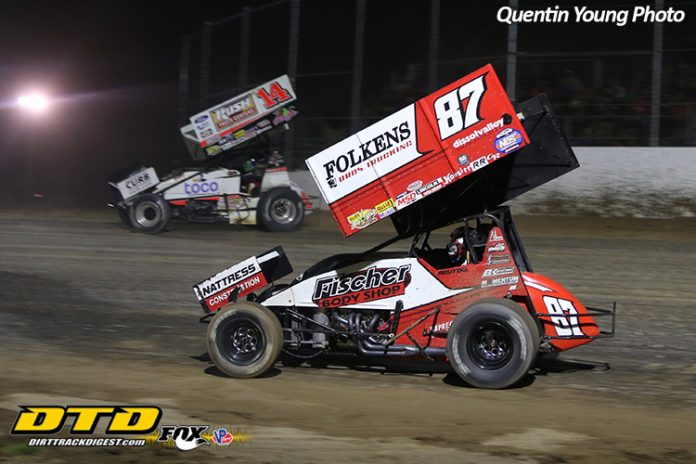 BROWNSBURG, IN – As tradition has it, the Ollie’s Bargain Outlet All Star Circuit of Champions presented by Mobil 1 will begin the 2020 season in the Sunshine State, set to invade a pair of ovals for a total of four nights of racing between February 5th & 11th.

Although championship points are not up for grabs, All Star teams will battle for four separate $5,000 top prizes during their Florida visit, kicking-off with Volusia Speedway Park’s annual DIRTcar Nationals on Wednesday, February 5. The All Stars will spend two days at the ‘World’s Fastest Half Mile Dirt Track’ with their DIRTcar Nationals visit, complete with a second consecutive appearance on Thursday, February 6.

Teams will have the opportunity to become reacquainted with Volusia Speedway Park before the tour, as an open practice session is scheduled for later this evening – Tuesday, February 4.

After back-to-back nights of competition at Volusia, Tony Stewart’s All Star Circuit of Champions will enjoy three days off in the Florida sun before turning their competitive focus to the outskirts of Tampa. There, for the first time since Tony Stewart’s acquisition, the traveling Series will invade East Bay Raceway Park for a pair of programs on Monday and Tuesday, February 10 & 11.

Made possible by Winn-Dixie, a leading grocery store chain in the Southeast, as well as Sage Fruit, a Washington-based fruit sales and marketing firm that specializes in fresh apples, pears and cherries, the All Star invasion of East Bay Raceway Park will bring to an end a 10-year hiatus at the 1/3-mile clay oval.

Steve Williams, VP of Produce and Floral for Southeastern Grocers, said, “We know our customers in the Southeast are passionate about racing. We share their excitement and are pleased to be able to partner with the All Star Circuit of Champions and Sage Fruit on a fresh and engaging activity for our customers and neighbors.

“We are thrilled to join Winn-Dixie in bringing the All Star Circuit of Champions back to East Bay Raceway Park,” Chuck Sinks of Sage Fruit stated. “This was an excellent opportunity for us to lend our support, while also promoting Sage Fruit in the greater Tampa market, and a great opportunity for Sage Fruit to become affiliated with an exceptional Series like the All Stars. We hope to make this an annual occurrence.”

Many of the teams expected to compete full-time with the All Star Circuit of Champions in 2020 will be representing the Series during the four-race Florida stint including two-time and defending champion Aaron Reutzel. The Clute, Texas-native amassed 16 Series victories last season, also accumulating an untouchable 33 top-ten finishes in 40 feature starts.

Those who cannot make the trip to Florida to witness the first four nights of the All Star Circuit of Champions season can still see all of the action live via FloRacing, the official media partner of the All Star Circuit of Champions. FloRacing will be on hand to capture every lap from Volusia and East Bay as well as the entire 2020 All Star campaign. Those wanting to learn more, such as subscription availability and features, should visit FloRacing on the Web at www.floracing.com. FloRacing is part of the FloSports network. Learn more at www.flosports.tv.

Volusia Speedway Park pit gates are scheduled to open at 10 a.m. on Wednesday and Thursday, February 5 & 6, with pit windows opening for sales at 12 p.m. The facility will be swept at 3 p.m. each day, followed by immediate re-access and hot laps at 6 p.m. sharp. Additional information pertaining to Volusia Speedway Park’s DIRTcar Nationals featuring the All Star Circuit of Champions can be found on the Web at www.dirtcarnationals.com, or at www.volusiaracing.com.

East Bay Raceway Park will allow pit access all day on Monday and Tuesday, February 10 & 11. Following a facility sweep at 2:45 p.m., pit windows will open for sales at 3 p.m., followed by hot laps at 6 p.m. More news and notes pertaining to the All Star Circuit of Champions presented by Winn-Dixie and Sage Fruit at East Bay Raceway Park can be found online at www.ebrp.co.

Those wanting to learn more about Winn-Dixie store locations, sales and promotions and rewards program can do so by visiting www.winndixie.com.

More information pertaining to Sage Fruit, including fruit selection and availability can be found at www.sagefruit.com.