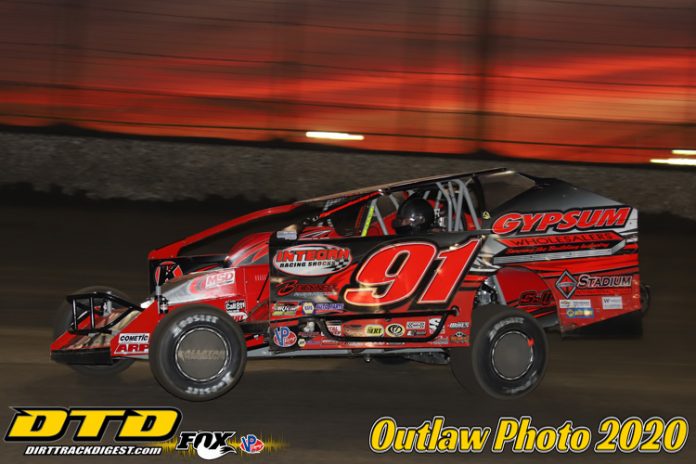 Thirty-six Big Block Modifieds were set for time trials on night number one and when it was over Unadilla N.Y., resident Billy Decker took the Gypsum Wholesalers 91 to quick time of the night.

The achievement earned him five points toward the DIRTcar Nationals championship.

Coming out in group four Decker was chasing the quick time of 17.726 set by defending Super DIRTCar champion Mat Williamson.

Decker wasn’t surprised that he came out of the final group as he told DTD, “The track hadn’t changed where we were running. A car could slide though and if you could hit the spot it could an advantage to you.”

Continuing he said, “It was greasy out there.”

In stopping the clock the fastest he explained, “It is an ego thing. You really want to get a fast start and put yourself in a good position for the heat race. Now I just have to go out there and make the most of it.”

He noted, “The track is a bit narrow and there is a big bump both low and high in the first turn.”

The four groups saw Mat Williamson the fastest in the first at 17.726 while Brett Hearn was 17.740 for fast time in Group Two and Matt Sheppard along with Stewart Friesen had identical 17.987’s, but Matt had a quicker first lap thus giving him the pole for the fourth heat.

Decker went on to finish second in his heat race to Michael Maresca earning him the eighth starting spot in the feature.