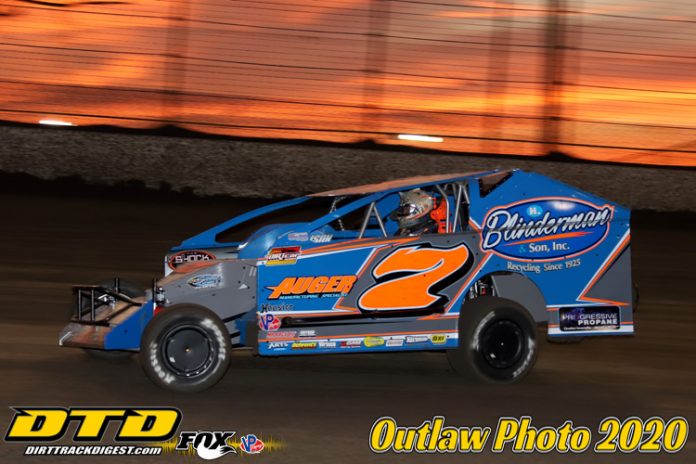 There were several new names among top eight for the second night of the Super DIRTcar Modified thus making the draw a little bit interesting.

The most exciting heat of the night was the final one as Andy Bachetti and Rick Laubach started up front. The race long battle finally ended on the final lap at Laubach made the pass. Bachetti settled for second and they were followed by Peter Britten, Billy Decker and Jeremy Smith.

On the start in heat one third place starter JoJo Watson slipped in turn one and suddenly lost two positions.

Mat Williamson and Billy Dunn filled the front row and Mat jumped out to the early lead and as the race played out the front row locked down the top two spots.

Meanwhile, Jimmy Phelps and Anthony Perrego were putting on a tremendous battle that saw third place swap positions at lead three times in the final lap and a half.

Perrego picked up third and also qualifying were Jimmy Phelps and Demitrios Drellos.

Heat two was a heated early race battle between high running Stewart Friesen and low runner Larry Wight. The 99L made several challenges down low, but it was to no avail and then he mirrored Stewart’s line as the race progressed.

They finished one-two and getting to the big show were Billy Pauch, Ronnie Johnson and Brian Swartzlander

It was the front row once again as Erick Rudolph and Brett Hearn ran away from the field to top heat three.

Matt Sheppard was third, but Justin Haers passed him on the first lap from his fifth starting spot. Haers finished third and Sheppard and Tim Fuller completed the qualifiers.

Non-qualifiers included Dillon Steuer, Jim Rasey, Russell Morseman and Tyler Thompson. The Thompson machine was surrounded by smoke as he headed to the pits at the conclusion of the event.

When reached car owner Jason Simmons said, “We are done for the week. I guess it was not our week to race.”

There was a single 13 car consolation for the Mods.

The heaviest hit of the night saw Stangle battling for a qualifying spot only to get up high, slam the wall and ride it for several yards inflicting severe damage to the machine.