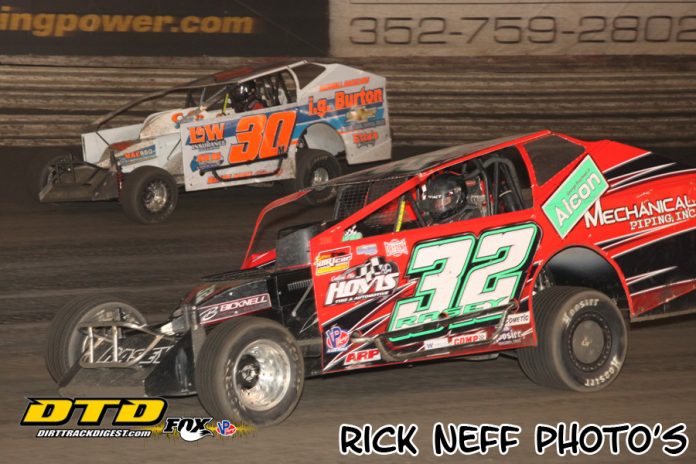 Seven of the eight draw positions from the qualifying heats came from the front row on night number three of the Super DIRTcar Nationals.

Matt Sheppard ran away with the first heat of the evening and outside front row partner Mike Maresca finished second. Maresca’s team replaced the front clip overnight after a hard hit on night two.

The front row of heat two also locked themselves into the draw with pole sitter Erick Rudolph winning and Demetrios Drellos second.

Rick Laubach, the only car still on bars, won heat three while Brett Hearn came from third starting spot for the other draw position.

In the fourth and final heat Larry Wight and Stewart Friesen started one-two and finished one-two.

For Friesen his car had just three laps just prior to the heat race as he was at “The Big Track” throughout the day with his truck. He came in strong and earned a draw spot.

Rasey had been battling JoJo Watson (who had to replace the rear end after hot laps) and managed to pass Watson on a restart after Dillon Steuer lost a motor to bring out the yellow.

Twenty-six cars started the main event with provisionals going to Bachetti and Rauscher by virtue of the points garnered after two nights.