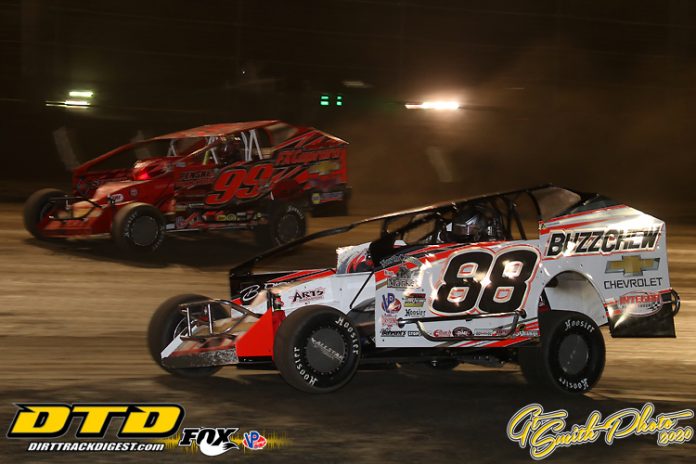 It was a “hammer down” race track as Mother Nature supplied the watering of an already pretty watered track.

Rain delayed the start of the action by a few hours, but when the Modifieds hit the track the results were high speed and action heavy at the DIRTcar Nationals.

In heat one pole sitter Rick Laubach took the lead at the start and chasing him down was Billy Decker and Mat Williamson. Decker kept it close and at the checker was just .6 of a second behind the leader as the pair went to the draw.

Heat two saw pole sitter Matt Sheppard pull away quickly from the pole and his front row partner was Peter Britten. The duo kept the draw spots well in control.

Andy Bachetti and Billy Dunn started on the front row, but on the second lap the pair made contact in the second turn. Dunn headed for the pits for a tire. Meanwhile, Tim Fuller also suffered a flat and returned to the rear of the field.

As the race progressed action mid-pack saw Pat Ward and Ronnie Johnson come into contract with one another and R.J. looped it. He showed his displeasure with Ward over contact in the backend of the 42p and further aggressive activity on the restart.

Late in the race leader Bachetti was penalized two spots for jumping the start.

Phelps got the lead and at the checker Bachetti was second for the other draw spot and qualifying for the main were Justin Haers, Tim Fuller and Billy Dunn.

The fourth field was relatively uneventful as only six cars answered the call to the green.