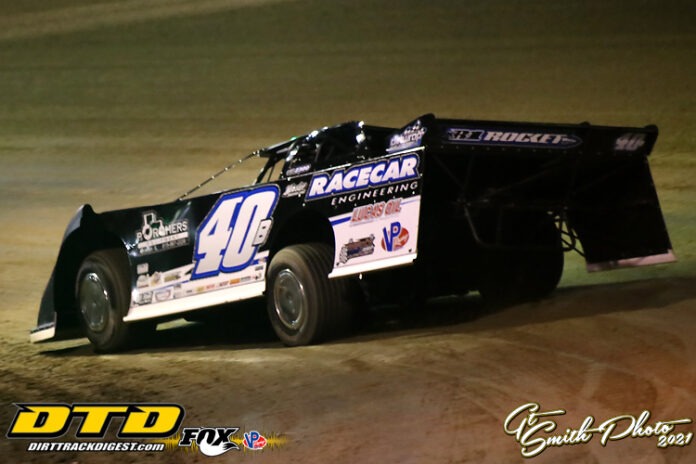 Michael Page was initially declared the winner of the DIRTcar Pro Late Model Feature, beating everyone to the checkered flag first, but faced a disqualification following a post-race technical inspection.

It was determined by DIRTcar and Crate Racin’ USA officials that Page’s car had a valve spring installation height infraction, nullifying his victory. Upon a passing inspection of Bronson’s engine, Bronson was awarded the $10,000 check and declared the Feature winner.

“Anytime you can make some money, it’s always good. You hate to win ‘em that way, but we all know how these deals are going in. You’ve got to be 100 percent right,” Bronson said.

Bronson began his charge to the front from outside the third row, using the early caution flags to his advantage by doing some of his passing work on the restarts. By Lap 6, he had cracked the top-three and was hot on the trail of second-place Joseph Joiner and leader Page.

Bronson was able to get by Joiner on Lap 13, setting him up for a charge through lapped traffic in pursuit of Page, who was a few car-lengths ahead. Bronson was able to close the gap to just over .3 seconds before Page pulled away again, and a final yellow was displayed with just eight laps remaining.

When the checkered fell, Bronson was unable to get ahead of Page at the stripe, leaving him with a runner-up finish but only for a few hours. Page’s technical inspection wrapped up after midnight on Sunday; Bronson passed his and was declared the winner in the early morning hours.

Outside of Victory Lane was another unsung hero, making his Sunshine Nationals and Volusia Speedway Park debut, and he did not disappoint. Twenty-seven-year-old Mack McCarter put on a dazzling display of passing on both nights in his first-ever appearance, coming all the way from 20th to cross the line in third Saturday. He was later awarded a second-place finish following Page’s disqualification.

McCarter, of Gatlinburg, TN, was awarded Hard Charger honors on both nights, passing 17 cars Thursday en route to his runner-up finish and 18 cars (17 on-track) Saturday. As impressive as the run was, he knew he may have had something for the leader had he started farther forward.

“Our racecar is really good when [the track] blows off and gets kinda dirty,” McCarter said. “We qualified really well but the invert put us behind in the Heat and we didn’t tighten-up enough. I think if we would have started up front, I would’ve had a good shot to run, and possibly have won.”

Overall, McCarter was pleased with his performance and that of his crew and car builder. Considering he made his first-ever laps on the track just two days prior, coming out of the weekend with two runner-up finishes and an overall mini-series title wasn’t too shabby.

“Just to come down here and run with these guys like Kyle Bronson, outrun him Thursday night and then finish behind him tonight, it just speaks volumes to where our team is,” McCarter said.