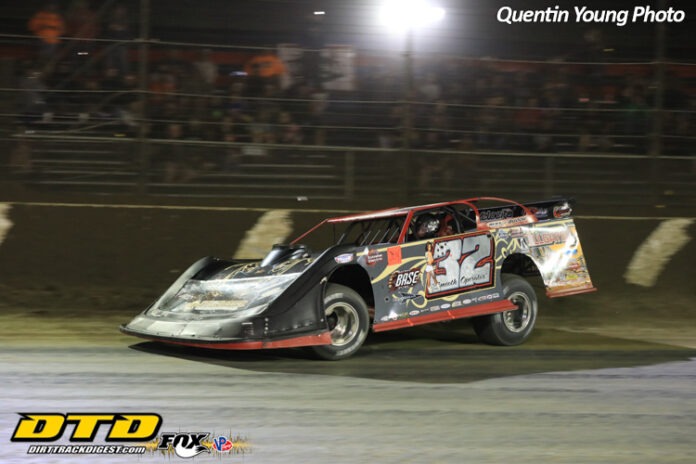 Pierce led from the drop of the green in the 30-lap main, with Hudson O’Neal in tow early. A lap ten restart gave Moran a shot at O’Neal, with Moran taking the spot on lap ten. From there, Moran slowly reeled in Pierce for the lead.

A lap 16 slider gave Moran the lead for a split second, but Pierce responded well and crossed under Moran. Lapped traffic wasn’t falling in Moran’s favor, and every run on Pierce was nulled by traffic. A yellow with eight laps to go gave the leaders clear track, and Pierce fired well on the restart.

In the final laps, Moran made one last run at Pierce, but Pierce kept his car planted on the cushion and held on for his first Volusia Speedway Park win.

“That one definitely had me nervous at the end,” Pierce said. “Devin and I are real good friends, I knew he was fast, and I saw my spotter sticks getting closer and closer at the end there. I’m not sure how I pulled the crossover to his slider, I probably about took off his left front doing it. I heard him below me and knew something might be coming, so I set up for the corner anticipating it and it all barely worked when it came. From there, I was just happy to hold him off.”

Moran seemed to be equal if not quicker than Pierce for much of the event, but with Pierce starting in front, the speed differential was not enough for Moran to overcome the starting position difference.  He finished seconed.

“I had it free enough to run the wall like that, but tight enough to turn off of it when I needed to,” Moran noted. “Neither Bobby or I went good here last night, so it was cool to see us both turn it around. Hopefully we just hit the pill draw a little better tomorrow and get one spot better on track.”

O’Neal nearly grabbed second from Moran on the final restart, but ultimately settled for third as the top two battled it out.

“I honestly think we were better than we showed,” stated O’Neal. “This is our first run here this year so I’m happy we came out of the box this good, I just didn’t take advantage of situations enough to capitalize on them.”

Brandon Sheppard and Darrell Lanigan rounded out the top five.