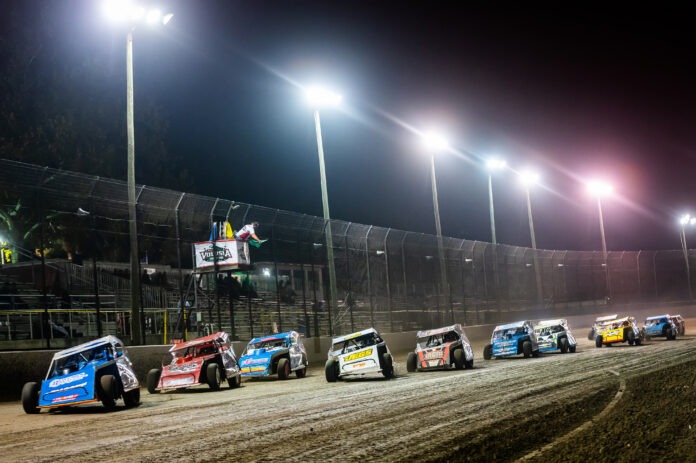 BARBERVILLE, FL – Twenty of the best DIRTcar UMP Modified drivers in the country have locked themselves into the richest race on the fall calendar.

The eighth annual Emil & Dale Reutimann Memorial kicked off Friday night at Volusia Speedway Park with 51 teams lining the pit area, all looking to punch their ticket into the $7,000-to-win finale on Saturday night. After Qualifying, the field was divided up into four, 15-lap Showdown Features that took the top-five finishers into Saturday’s field and redrew the top-two for a starting spot in the top-four rows.

When all was said and done, Nick Hoffman, Victor Lee, Tyler Nicely and Rich Dawson had all claimed victory, cementing their spots inside the first two rows on Saturday’s starting grid. Each of the other 31 drivers yet to qualify into the field will line up in one of two Last Chance Showdown races to start Saturday’s program.

The UMP Modifieds are accompanied by the 604 Late Models and Street Stocks in Saturday’s program, starting with Hot Laps at 5:45pm. Grandstand gates open at 4pm. If you can’t watch at the track, stream all the live action with a FAST PASS subscription to DIRTVision presented by Drydene.


Picking up right where he left off after hoisting a record sixth consecutive Big Gator trophy at the 50th DIRTcar Nationals in February, Nick Hoffman garnered his first career Reutimann Memorial Showdown Feature win, leading all 15 laps unchallenged for the $500 check and trophy.

Though he drew fourth in the redraw, one of Hoffman’s strengths in the Modified is distance racing. He hung tough with Tyler Nicely and Justin Allgaier in the Reutimann finale last year and is ready to improve two spots and cash-in for his first farm tractor trophy on Saturday.

“From fourth, it’s 100% possible,” Hoffman, of Mooresville, NC, said. “Got some pretty good cars up front, and you’ve just got to bide your time. Fifty laps is a really long time. Even that 30-lapper [Gator Championship] Feature is a long time, so you add another 20 laps to it, and it makes a big difference.”

With Modified ringer Kyle Strickler starting to his inside, Victor Lee didn’t flinch a bit at the drop of the green. He powered around the outside of the 2018 Reutimann Memorial winner with ferocity on Lap 1 and went on to lead every lap en route to the $500 victory and a strong third-place starting spot for Saturday.

“Starting up front means a lot here,” Lee, of Danville, KY, said. “We drew a three, so it’s a pretty good starting spot. Fifty laps is a long, long race.

“It’s been 20 years since I’ve been here, so to come here this weekend and be as fast as we are, it’s pretty exciting for us.”

After winning the event for the first time last year, Tyler Nicely is trying to replicate the success he saw in 2020 with a brand-new car rollout at the Reutimann. It held up quite well for its second night out at Volusia, earning him a Showdown Feature win and the outside pole starting spot for Saturday.

Nicely grabbed the lead at the drop of the green and maintained a solid advantage throughout the 15-lap dash, leading each circuit and holding off hard-chargers Seth Geary and Ryan Toole to score the win.

He said he couldn’t have done it without the help of the team at Longhorn by Loenbro Motorsports in China Grove, NC, who helped repair his wrecked car from an accident in a race last weekend. Now, he’s put it on the front row of a marquee event with a chance at $7,000 in prize money.

“I dropped it off after that wreck and the guys at Longhorn by Loenbro went through it. They did all the maintenance on it for me this week, I just had to go pick it up. Those guys are really helping me out a lot,” Nicely, of Owensboro, KY, said.

Though he led every lap, Rich Dawson had a near-escape coming to the checkers.

Brandon Wells rode behind Dawson the entire race until they entered a lapped-car situation in the closing laps. Dawson was closing in rapidly on a lapped car as he crossed the stripe to take the white flag. He drew to within a single car-length entering Turn 3 as Wells drove it deep into the corner.

Side-by-side they raced out of Turn 4, the slower car still right in Dawson’s path. But the high-side momentum saw Dawson though and he was able to sneak by Wells’ challenge and stay off the lapped car to secure the W.

“Coming to the white flag, I was like, ‘okay, [the lapped car] is far enough ahead, I’m gonna run my same line and try to not overdrive the car,’” Dawson said. “When we were coming into Turn 3 here, I drove right up on him and figured I was probably gonna have to stay behind him because I didn’t know where [Wells] was quite at. But I was very surprised to see him peek his nose out right there.”