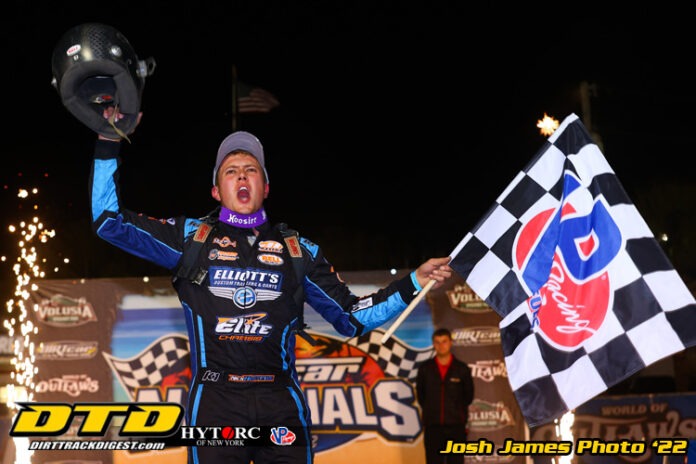 BARBERVILLE, FL – An entire family of reptilian gold is headed back to Mooresville, NC, after yet another dominating DIRTcar UMP Modified performance at Volusia Speedway Park from the now seven-time DIRTcar Nationals champion, Nick Hoffman.

Hoffman scored the win in Saturday’s Gator Championship Feature, the fourth of his career, giving him his seventh-straight Big Gator trophy as points champion of the division. No other driver has won more than two.

Starting sixth, Hoffman had some work to do to get to the lead. Outside polesitter Kyle Strickler maintained the top spot through the first 11 laps before Hoffman caught him in traffic and blasted by on the bottom out of Turn 2.

“I got aero-tight a couple of times behind him, and then in lapped traffic too, when we were racing through,” Hoffman said of his chase with Strickler. “I just had to bide my time and slow down. I didn’t want to wear my tires out. We were killing tires earlier, so I didn’t know, being later in the night, how bad tires wear was going to be of an issue.”

From that point forward, it was all Hoffman’s race to lose. He was never seriously challenged for the lead again.

Meanwhile, the battle for second was heating up behind him. Strickler held second for a restart on Lap 13, but Will Krup made the most of the bottom lane that Strickler have him have at the drop of the green, swiping the spot away with a horsepower move down low.

Krup’s time in second wouldn’t last, however, as Strickler got another chance on a restart at the halfway point. He ripped around the top groove and was able to carry enough momentum to get back around Krup on Lap 16.

Looking back, Krup said he should’ve done more to miss a small patch in Turn 1 that upset the car, costing him some speed.

“I clipped it a couple times off that restart once I got around him, and [Strickler] was able to roll back around me,” Krup said. “After that, I just kinda fell in line and tried to bring home a strong third-place finish.”

Strickler gave it all he had to catch Hoffman in the final 10 laps but was unable to make up the gap. Hoffman’s lead was as large as four seconds at one point, further showcasing his dominance on the half-mile tracks.

“Any of the places like this here or Eldora – those big places that you can just momentum and make speed through the corner ­­– I feel like that’s where my car is the best and it’s where I’m the best,” Hoffman said.

After redrawing the sixth spot on the starting grid, Hoffman knew he was not going to be denied of his fourth Gator Championship Feature win.

“Even with Kyle starting on the front row, I felt like my racecar was that good,” he said. “I had no doubt in my mind that my racecar was plenty good enough to do this deal from sixth.”

Strickler crossed the line in second with a car he said he could handle, but just needed more speed.

“We went a completely different direction for the Feature, and I got the feel I needed on the front-end, but we just weren’t stuck enough in the rear of the car,” Strickler said.

Despite his relentless efforts to catch Strickler, Krup came up just a bit short. However, the podium finish goes down in the record books as one of his best-ever finishes in the Gator Championship at Volusia.

“At the end of the race, I felt like I had a decent chance at [Strickler],” Krup said. “We kinda got in lapped traffic, but I couldn’t get around him. All-in-all, still a good run.”

The UMP Modified portion of the 51st DIRTcar Nationals is complete, but DIRTcar Racing isn’t done at Volusia just yet. The event breaks on Sunday but will return to action on Monday with the DIRTcar Late Models alongside the debut of the Xtreme Outlaw Series Non-Wing Sprint Cars.