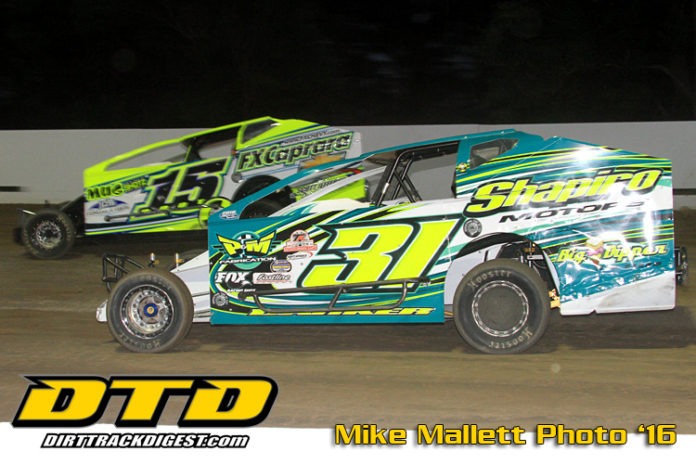 WEEDSPORT, NY – The ‘Empire State Challenge’ will officially open the 2017 racing calendar at Weedsport Speedway on Sunday, May 21 featuring the Craftsman World of Outlaws Sprint Car Series and the Sportsman Shootout Series, including the Sportsman ‘Premium Dash’ presented by Senior Services Insurance Agency.

An extension of the regular racing program for the Sportsman Shootout Series that evening, full details on the dash procedure will be available in the coming weeks.

“The Sportsman division has always been one of my favorite classes,” said Tim Bowman, co-owner of Senior Services Insurance Agency.  “They don’t always race for the biggest purses so I thought I’d sweeten the pot and give them a much deserved dash in what will be a packed house with the World of Outlaws coming to town.”

Also signing on as a VIP hospitality suite partner for the evening, Senior Services Insurance Agency will enjoy a full night of racing from one of the best seats in the house.


“The Heinkes along with Jimmy and Shannon Phelps have put the Speedway on top as one of the best facilities in the northeast,” said Bowman.  “I’m happy to help the Sportsman out with a little extra bonus.”

Senior Services Insurance Agency, Inc. is an independent insurance brokerage specializing in Health and Life Insurance for the Medicare community.

In operation for nearly 30 years, Senior Services Insurance Agency is owned by father Kevin Bowman, and son Tim, and has been a leader in Upstate New York as a “one stop shop” with major carriers such as Todays Options, Excellus, AARP, and United Healthcare.
For more information visit online at www.medicareseniorservices.com or call (315) 245-3834.

The Craftsman World of Outlaws Sprint Car Series and Sportsman Shootout ‘Empire State Challenge’ on Sunday, May 21 will see racing action take the green at 7 p.m. as it kicks-off back-to-back nights of racing to open the 2017 season.
‘Big Monday’ will keep the action rolling on Monday, May 22 featuring the Super DIRTcar Series Big Block Modifieds and the Sportsman Shootout Series with racing again beginning at 7 p.m.
Those interested in marketing opportunities similar to that of Senior Services Insurance Agency, including VIP hospitality suites, for the 2017 season are encouraged to reach out to Tana Robinson at (315) 834-3067 or tana@weedsportspeedway.com.
For a full 2017 schedule and Weedsport Speedway information be sure to visit online at www.weedsportspeedway.com.  Fans can also FOLLOW on Twitter @WeedsportSpdwy and LIKE on Facebook at www.facebook.com/weedsportspeedway.