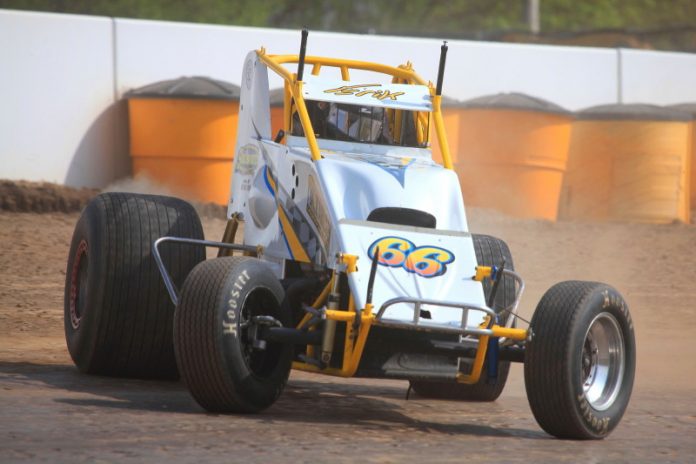 WEEDSPORT, NY – While over a dozen cars took their first laps of the season at Weedsport Speedway on Sunday afternoon as a part of the speedway’s open practice session, all eyes were anxiously waiting to see 360 sprint car racers Chuck Hebing, Kelly Hebing, and Erik Karlsen hit the track for a wingless shakedown in anticipation of the ESS/URC ‘Ultimate Wingless Shootout’ on June 25.

Karlsen and the Hebings did not disappoint, taking to the speedway for several laps after 4 p.m., backing their 360 sprint machines into the corners on each end of the Weedsport speed plant.

The track surface, which was dry slick by the end of the day’s test session, provided multiple grooves for the wingless sprints and provided a glimpse into what should be a memorable evening on June 25.

The ‘Ultimate Wingless Shootout’ will feature wingless ESS and URC 360 sprint cars along with the Sportsman Shootout Series.

For more information on the ESS/URC ‘Ultimate Wingless Shootout’ visit online at www.weedsportspeedway.com under the schedule tab.


Joining the three 360 sprint cars on hand for Sunday’s hot lap session were a wide variety of machines from 305 sprints and 4-cylinders to the Mod Lites of Sam Usborne and Keith Stevenson as well as the Modifieds of Mike Ward and Andrew Ferguson and Sportsman competitors Dave Marcuccilli, Hillary Ward, and Carl Warren.

The afternoon’s session ran accident free although Stevenson appeared to have experienced engine failure in his No. 4 Mod Lite in his only trip around the speedway.
Weedsport Speedway will officially open the 2017 season with a double header on May 21 and May 22.