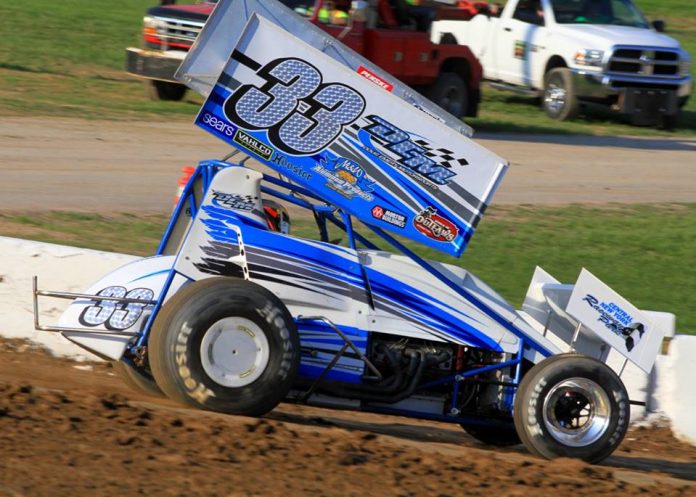 WEEDSPORT, NY – The Craftsman World of Outlaws Sprint Car Series and Super DIRTcar Series Big Block Modified back-to-back special this Sunday and Monday at Weedsport Speedway is exciting enough; throw in three drivers looking to pull double duty, and you have something special.

Stewart Friesen, Larry Wight, and Mike Mahaney are three drivers that will compete in both the World of Outlaws Sprint Car event on Sunday, May 21 and the Super DIRTcar Series Big Block Modified special on Monday, May 22.

Friesen, a former World of Outlaws winner at Oshweken Speedway in July of 2015, says there is nothing quite like running with the Outlaws.

“It is just awesome to run with the Outlaws and it is so much fun,” said Friesen.  “I grew up watching those guys on TV; they are the best in the sport.  You can race side-by-side with them and not have to worry about a thing.  It means a lot to run with them and run well against them.”

While Friesen is a World of Outlaws winner, he says that his sprint car program is a constant work in progress, and there is plenty of work to be done to be competitive in all track conditions.


“We have learned a lot recently in our 410 program, especially in the shock department,” said Friesen.  “When we won that show at Oshweken a couple years back, everything went our way.  The track got dead slick and Jessica (Friesen) really knows how to tune a car for that.  But we know we need to improve our game when the track is heavy and I think we have been able to do that.”

“We ran our new DKM Modified at Bridgeport this week and I think we really have things going in the right direction now with the Hoosier tires.  Bridgeport was a great show on Tuesday and I expect the same for the Big Blocks on Monday,” said Friesen.

While ‘Lightning’ Larry Wight does not have a World of Outlaws 410 feature win he has won in 360 sprint car competition in the past and has of course thrilled the open-wheel community in recent years with his trips to the Chili Bowl.

Like Friesen, Wight says running with the Outlaws is an honor, but and competing against them is a bigger honor behind the wheel of the LJL Racing No. 99L.

“To run with Donny Schatz, David Gravel and those guys is really a big deal,” said Wight.  “But, we want to be able to be up front and compete with them and show them what the northeast guys can do.  We are kind of up here on our own in a lot of ways, but we all can get it done with the best of the best.”

A veteran of Modified racing through the years, Wight says running the sprint car is a different experience.

“I love driving the Modified because it is what I grew up with and what I am involved with,” said Wight.  “The sprint car though is way more fun to drive.  We have had the engine on the dyno here recently for some testing and we are looking forward to giving it another go on Sunday.”

Wight currently sits in the top five of the Super DIRTcar Series Big Block standings, along with Friesen, and says that his Modified program is where he wants it.

“We have been on a pretty good run lately with the Big Block,” said Wight.  “We just ran Bridgeport on Tuesday and ran well.  It has been a long week but we will be ready to go.”

While driving wheel to wheel and winning this weekend is the goal, Wight commented on how being at Weedsport Speedway is a thrill in itself.

“Al Heinke, Jimmy Phelps, and the crew at Weedsport Speedway have just put an amazing effort into that track,” said Wight.  “It’s the palace of racing in the northeast.  It is really a NASCAR type atmosphere and helps give dirt racing the image it needs on the national level.”

With Friesen and Wight taking on the Outlaws with 410 power plants, Mike Mahaney will roll into Weedsport on Sunday with the Emery Racing No. 33 360 sprint before competing Monday with the Buzz Chew Chevrolet No. 88 Big Block.

“Our first obstacle is really our schedule,” said Mahaney.  “We do not have time to swap the engine for the Outlaw show.  So, we are going to compete with our 360 engine.  This should pose a major disadvantage in qualifying, but we hope to be competitive later in the night.”

Mahaney has only competed with the Outlaws on one other occasion, running at Fulton Speedway last year with an Emery Racing 410 sprint.  Charging from last to 8th, Mahaney was on a roll before having an issue with the injection linkage with only nine laps to go.

“I really enjoyed it last year,” said Mahaney.  “The Outlaw guys are competitive, yet clean racers.  That reminded me a lot of racing with the Super DIRTcar Series.  I hope to get more opportunities to race with them in the near future.”

Mahaney of course has plenty of experience at Weedsport in Modified competition and is hopeful for a big night on Monday as well.

“I’m looking forward to hopping back in our Buzz Chew Chevrolet No. 88 on Monday,” said Mahaney.  “I have a lot of laps at Weedsport and a couple wins, so I feel confident when we go there.”

Weedsport’s 2017 season of course kicks off on Sunday, May 21 with the Craftsman World of Outlaws Sprint Car Series Empire State Challenge as well as the Beyea Custom Headers Sportsman Shootout Series and the Senior Services Insurance Agency Sportsman Premium Dash.

Racing begins each night at 7 p.m.  Tickets are available on www.weedsportspeedway.com.