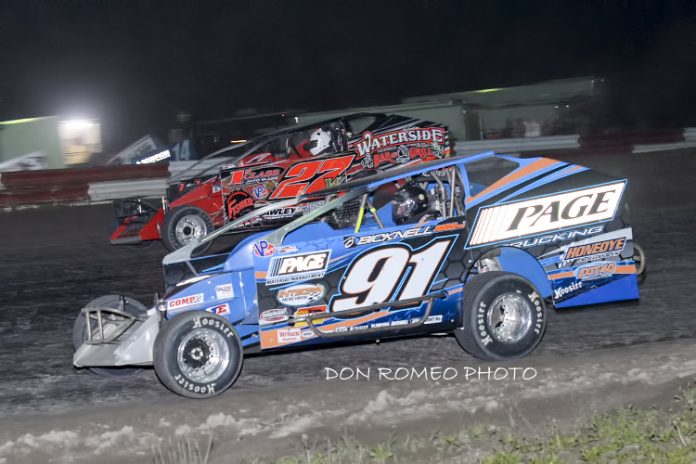 WEEDSPORT, NY – Weedsport Speedway is the flagship station of northeast DIRTcar Modified racing and on Tuesday, July 11 Weedsport will pay tribute to the history of DIRTcar racing with the annual $10,000 to win Hall of Fame 100 for the Super DIRTcar Series Big Block Modifieds.

A fantastic night of racing will follow the 26th annual Hall of Fame Induction Ceremonies at the Northeast Dirt Modified Hall of Fame and Museum on Monday, July 10, located directly next to the Speedway.

This year’s Class of 2017 includes Alan Johnson, Steve Paine, and Freddy Adam.  The event is free and open to the public.

Tuesday’s racing will be the first time the Super DIRTcar Series Big Blocks see Weedsport in 2017, as the series’ first stop was postponed due to rain back on May 22.

The cars and stars of the Super DIRTcar Series are chomping at the bit to take on The Port including leading regulars Billy Decker, Stewart Friesen, Brett Hearn, Matt Sheppard, and Larry Wight, especially with a whopping $10,000 on the line for the winner.


Currently holding a 21-point lead on Stewart Friesen and Brett Hearn, before events at Airborne and Cornwall, Decker is looking forward to turning around his recent luck at Weedsport.

“We really haven’t run well there recently,” said Decker. “But, the Mike Payne Racing team has been working hard to prepare and be ready; they have put in a lot of hard work.  Weedsport is the home of DIRT Modified racing and it is just exciting racing.  The Weedsport group has done great with the facility and the atmosphere is next to none.”

Tomkins wowed spectators with a tremendous last lap pass on Rudolph to win last year’s Hall of Fame 100, and says he is bringing back the same ride for this year’s edition.

“The Bicknell owned by Darren Kendrick we won with last year will be the one we bring back this year,” said Tomkins.  “We didn’t time trial well last year, but caught a break in the heat to get into the redraw. But, we definitely had speed in the feature. If all goes well, I don’t see why we wouldn’t have a good shot of doing well again this year.”

Joining the Super DIRTcar Series Big Blocks on July 11 will be the future drivers of the sport in the Beyea Custom Headers Sportsman Shootout Series.

Making for a three-division lineup on July 11 will be the Vintage Antique Stock Car club.  As a tribute to Hall of Fame weekend, these throwback machines of yesteryear will take on the 3/8 mile to give fans a taste of racing’s past at Weedsport.

Pit gates will open at 4 p.m. on July 11 with grandstand gates opening at 5 p.m. and a driver autograph session planned for 5:15 p.m.  Qualifying will hit the Speedway at 6:40 p.m. with opening ceremonies set for 7 p.m.

For a full 2017 Weedsport Speedway schedule and detailed information on the Hall of Fame 100 be sure to visit online at www.weedsportspeedway.com.  Fans can also FOLLOW on Twitter @WeedsportSpdwy and LIKE on Facebook at www.facebook.com/weedsportspeedway.