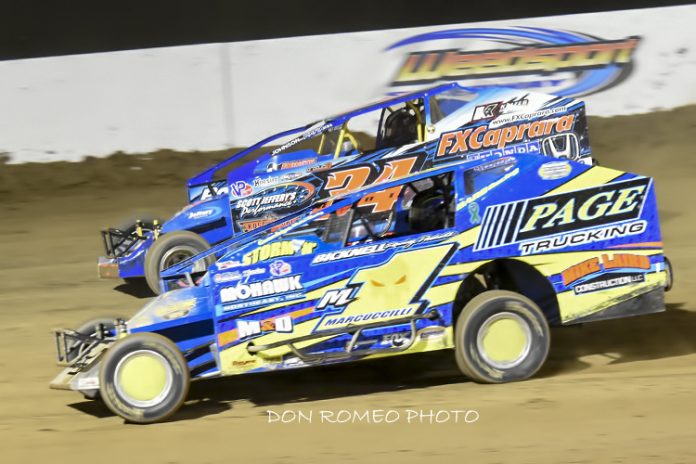 WEEDSPORT, NY – With the WACK 1420AM ESS Legends Reunion fueled by Pit Stop Convenience Stores on tap this Sunday at Weedsport Speedway, the Beyea Custom Headers Sportsman Shootout Series will also again be in action with Dave Marcuccilli and Kevin Ridley leading a tight race at the top of the standings.

Marcuccilli currently holds the lead by a mere 2-points over Ridley thanks in part to a recent victory in the Industrial Tire of CNY Sportsman Classic on July 3. Like Ridley, Marcuccilli has earned one victory as well as three top five and three top ten finishes in three starts this season.

Weedsport’s 2015 champion, Marcuccilli most recently finished second at Weedsport, behind Rocky Warner, during Hall of Fame 100 weekend on July 11.

Ridley earned his Weedsport victory in the season opener on June 25 and he hasn’t looked back since. Following his dominating win on June 25, Ridley has posted two fourth place finishes in the No. 20X to keep pace with the Marcuccilli No. M1.

Factoring in the always tough field at Weedsport events, the current runs by Marcuccilli and Ridley are even more stellar, as they are the only drivers to finish in the top five in all three races.


The only driver that comes close to that mark is the driver riding third in the standings, Tyler Trump. Driving the No. 9X, Trump has scored just one top five, but joins Marcuccilli and Ridley as the only shoes with three top ten runs in 2017.

Starting the season on a high note, Trump finished second to Ridley in the opener and has since scored two seventh place finishes to ride just 23-points out of the championship lead.

Three races into the season, Taylor Caprara and Kevin Root sit fourth and fifth in the standings each with one top five and two top ten finishes.

A total of 17 drivers have started all three events at Weedsport this season.

Pit gates will open at 4 p.m. on August 13 with grandstand gates opening at 5 p.m. Qualifying will hit the Speedway at 6:40 p.m. with opening ceremonies set for 7 p.m.

General admission seating is available on August 13 for only $15. Students 11-17 will be admitted for $5 with kids 10 and under FREE.

For a full 2017 Weedsport Speedway schedule and detailed information on the ESS Legends Reunion be sure to visit online at www.weedsportspeedway.com. Fans can also FOLLOW on Twitter @WeedsportSpdwy and LIKE on Facebook at www.facebook.com/weedsportspeedway.