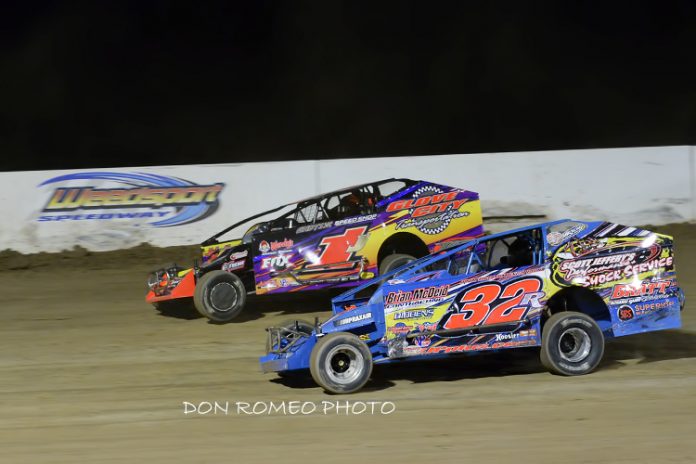 Warner redrew the fourth starting position in his No. 1J and after falling back to fifth from his outside second row starting position, eventually found the outside of the Speedway to challenge early race leader Zach Sobotka passed the halfway point of the 25-lap feature go.

Sobotka, who started on pole position, led the first 19-laps of the feature event in spectacular fashion behind the wheel of the No. 38 before giving way to Warner by inches at the stripe as a caution flag fell on lap 20.

Warner was able to restart as the race leader with only five laps remaining, and drove away to a smooth victory over Sobotka and new Sportsman Shootout Series point leader, Kevin Ridley.

Starting 7th, Ridley put on a tremendous drive in the No. 20X as he battled Warner, Dave Marcuccilli, and Kevin Root for the majority of the race, eventually besting championship rival Marcuccilli to wind up on the podium.


The No. M1 of Marcuccilli, who led the series standings by two points coming into the night, now trails Ridley by two points after narrowly avoiding disaster on two separate occasions.

Early on Marcuccilli slapped the fourth turn wall battling on the high side and later collected a spinning Ron Davis III, who spun across the field after making a low side bid for the lead on Sobotka.

In each instance, Marcuccilli was able to continue on and fight for his fourth top five finish in four starts this season, chasing Kevin Root across the line in fifth position.

A total of 32 Sportsman competitors were on hand Sunday with Matt Guererri, Warner, Root, and Will Shields winning heat races. Bob Henry Jr. took the checkered flag in the night’s B-Main.

For a full 2017 Weedsport Speedway schedule and detailed information on the September 4 Labor Day Double Play, be sure to visit online at www.weedsportspeedway.com. Fans can also FOLLOW on Twitter @WeedsportSpdwy and LIKE on Facebook at www.facebook.com/weedsportspeedway.