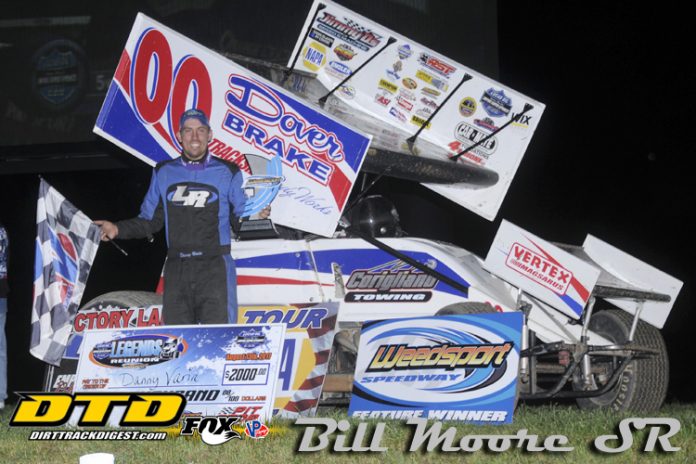 WEEDSPORT, NY – For a weekend that almost didn’t happen, it turned out into a dream weekend for Fonda, NY’s Danny Varin. He led all 50 laps, collected two wins and took home over $4,000 backing up his Fonda victory by also winning Sunday night at the Weedsport Speedway.

The win came on the annual Legends Reunion night where Lance Yonge and Mike VanDusen were inducted into the ESS Hall of Fame earlier in the day.

Varin’s win also was a part of the NAPA Auto Parts US Tour where he has now shot up to fifth place in points.

“We were actually thinking of taking the weekend off with our engine issues after Canandaigua,” Varin reflected, “But, I said we have to do the work eventually so let’s get it done and race at least Saturday at Fonda.  I joked that if we win we would then go to Weedsport…Well.”


Varin’s Dover Brake #00 was indeed in the field and was quick right out of the box. “The car felt really good from the start, it’s only our second time here in a sprint car so we were guessing a little bit,” he went on, “In the feature the draw of course was huge but I had a car that could go high or low and that was big with lap traffic.

“Last night the slower cars just seemed to be in the right lane for me to get around, tonight it was just the opposite so I had to change lanes quite a bit,” Varin continued, “When it’s like that you don’t know if anyone is closing in.”

Two cautions slowed the pace and enabled Central Pa and 12th place starting Lucas Wolfe to move into the runner-up slot and have a shot at the race long leader.

“Restarts were the best thing I had going, I was able to get a good lane whether top or bottom and then enabled me to get a group of cars at once,” he noted, “Unfortunately when he (Varin) got to open track he was real good.”

The final laps saw both in heavy traffic and produced a nail bitter of a finish. “I was in traffic and closed in but I just couldn’t get the good run to possibly have a shot to get by,” Lucas went on to thank folks, “I have to than R.C. Faigle, the Allebach’s for me to have an opportunity to race.  We came in from Knoxville last night and had a good run tonight.”

At the double checkered flag waived by Dave Farney, it was Varin taking the win followed by Wolfe and 14th place starting Jason Barney who earned hard charging honors. It was also a memorable night for Jimmy D’s Engines as they powered the top three finishers.  Rounding out the top five were Scott Kreutter and Jonathan Preston who had two top five finishes on the weekend.

A total of 30 sprints were in the pits in front of a big crowd at the Cayuga County oval.