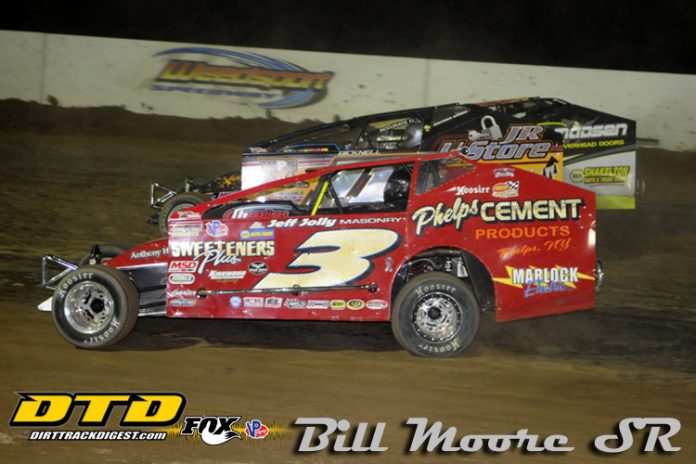 WEEDSPORT, NY – The cars and stars of the Super DIRTcar Series Big Block Modified tour return to Central New York on Monday, September 4 as a part of Weedsport Speedway’s Labor Day Double Play presented by Parts Plus and powered by Wix Filters.

The 17th stop for the Big Block Super DIRTcar tour will be the second and final at Weedsport Speedway for the 2017 season, making for a can’t miss night of action coupled with the winged 360 Sprint Car Open and the DIRTcar Pro Stock Series.

The only other stop for the Super DIRTcar series at Weedsport was a barn burner between Tim McCreadie and Stewart Friesen on July 11, with Friesen coming out on top by inches for a $10,000 pay day in the No. 44.

One driver that was noticeably missing from the July 11 Weedsport lineup was Matt Sheppard, who was serving a DIRTcar suspension during the running of the Hall of Fame 100.


Since returning to the tour Sheppard has been lights out, winning the last five Super DIRTcar events in a row, leading to this Thursday’s Mr. DIRT Track USA at Lebanon Valley Speedway.

As of August 28, despite missing two events, Sheppard trails point leader Decker by only 88-points in the race for the championship, with Sheppard aiming to make his only start of the season at Weedsport count on September 4.

Chasing Decker, Wight, and Sheppard on September 4 will be Brett Hearn, Pat Ward, Friesen, Fuller, Pete Britten and more including ‘Mad Max’ McLaughlin and Jimmy Phelps, who have come into their own in recent weeks.

McLaughlin recently scored his first two career Big Block wins at Fulton and Brewerton Speedways while Phelps is fresh off his second win of the year at Fulton.

With Keith Flach, Rudolph, Billy Whittaker, Brandon Walters, Rich Scagliotta, Mike Maresca and more in the lineup, the Labor Day Double Play will pit the best series regulars against the top runners in CNY on September 4.

Pit gates will open at 3 p.m. on September 4 with grandstand gates opening at 4 p.m. Qualifying will hit the Speedway at 5:40 p.m. with opening ceremonies set for 6 p.m.

For a full 2017 Weedsport Speedway schedule and detailed information on the ‘Labor Day Double Play’ be sure to visit online at www.weedsportspeedway.com. Fans can also FOLLOW on Twitter @WeedsportSpdwy and LIKE on Facebook at www.facebook.com/weedsportspeedway.