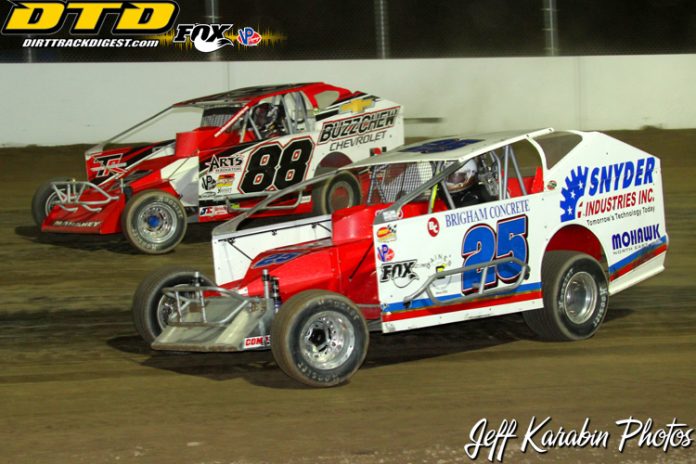 The DIRTcar 358-Modified series will be joined by the DIRTcar Sportsman series on October 4 for a one-two punch of action as a precursor to the Super DIRT Week finale at Oswego Speedway on Sunday, October 8.

As of September 24, Steve Bernard leads the DIRTcar 358-Modified championship with three wins on the season. Bernard has scored four top five finishes in only five starts this season to lead Chris Raabe in the championship by 27-points.

With zero wins or top fives, Raabe has finished in the top ten four times in six starts with the No. 01, and will look to close on Bernard during Super DIRT Week.

Mathieu Desjardins, Mario Clair, and Steve Bernier are the top five in the championship as of September 24 with Carey Terrance, Lance Willix II, Jordan McCreadie, Michel Parent, and Alex Therrien the top ten.


Weedsport will be the second of four stops for the 358-Modified tour during Super DIRT Week with action also being contested at Utica-Rome Speedway, Brewerton Speedway, and Oswego Speedway.

Weedsport’s October 4 event will be the second race on the championship series schedule for the DIRTcar Sportsman.

With home track and regional points now factored in, before the five race championship schedule begins on September 30, Rocky Warner is the series leader over Dave Marcuccilli, Ron Davis III, Brad Rouse, and Tyler Trump in the front five.

On the local level, Kevin Ridley and Marcuccilli will also continue their championship battle in the Beyea Custom Headers Sportsman Shootout Series at Weedsport. Each driver has one win on the season at The Port, with both having scored top five finishes in all four races this season. Ridley leads Marcuccilli by only two points.

Pit gates will open on October 4 at 4 p.m. with grandstand gates opening at 5 p.m. Qualifying will get underway at 6:40 p.m. with opening ceremonies for the evening set for 7 p.m.