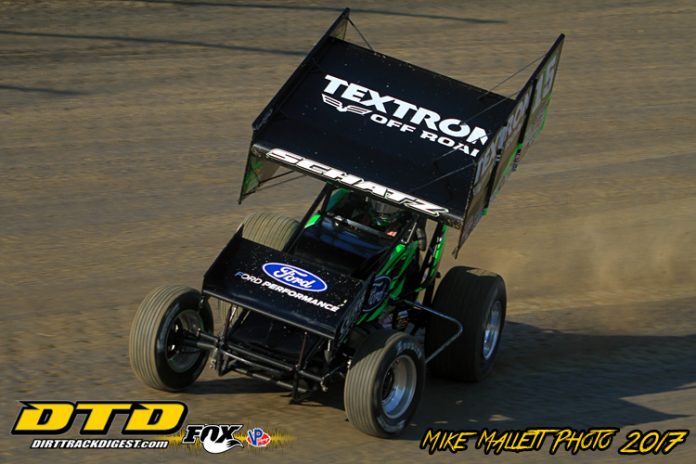 WEEDSPORT, NY – Despite a rain out in mid-May the cars and stars of the Craftsman World of Outlaws Sprint Car Series are eager to return to New York State on Sunday, October 15 as they take on Weedsport Speedway in the rescheduled Empire State Challenge.

With the Outlaws only making one trip a year to Weedsport, the drivers say the speedway’s unique layout, family friendly atmosphere, and major event feel makes it a prime stop for the tour.

“The track has a very unique shape,” said defending race winner and eight-time World of Outlaws champion, Donny Schatz. “You carry all of that speed into turn one, then it opens up into that sweeping back stretch. It’s a unique place for sure. You have to be aggressive but be able to be patient also.”

With 14 wins on the season, David Gravel is also excited to return to The Port.

“There is a big inside wall there,” said Gravel, who wheels the CJB Motorsports No. 5. “A lot of times the fastest way around is on the bottom. So you need to get as low as you can without hitting that wall. It’s a unique place that throws challenges at people, and I am always up for challenges.”


Shane Stewart, driver of the Larson/Marks No. 2, finished fourth at Weedsport last season and says the corner layout is what separates the track from the rest.

“The corners are just so different from each other,” said Stewart. “Turns one and two are really sharp and three and four are kind of a more sweeping corner, the place is shaped like a D. We do not race in New York as much as we used to, so it is always really good to get back up in that part of the country. This part of the swing is tough with all of the local competition in Pennsylvania and the northeast.”

While the race track provides unique challenges to the drivers and unique viewing opportunities for the fans, the drivers are not lost on all that Weedsport Speedway track owner Al Heinke and his team have done to advance the overall experience for spectators and teams alike.

“It’s great to see all that has been done at Weedsport in recent years,” said Schatz. “The place is so clean and fan friendly and those LED lights are just awesome.”

The Beyea Custom Headers Sportsman Shootout Series finale will also be a part of the evening.

Tickets for the return of the Craftsman World of Outlaws Sprint Car Series to Weedsport Speedway are available online at www.weedsportspeedway.com through the ShowClix application on the right hand side of the homepage.

Reserved seating is on sale for $35 with general admission seating available for $30. Student tickets aged 11-17 are $15 with kids 10 and under free.

Grandstand gates will open at 4 p.m. on October 15 with opening ceremonies at 7 p.m.

Ticket stubs and blue wristbands from May’s postponed program will be honored for the Sunday, October 15 reschedule of the Empire State Challenge.