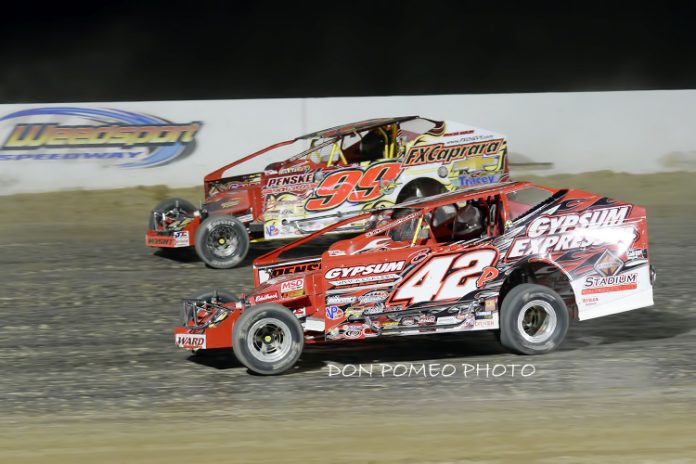 WEEDSPORT, NY – In another exciting announcement for Weedsport Speedway, two of the most highly-anticipated events of the season have been added to the television lineup for 2018.

Speedway Showcase, which debuted in 2017 with three Sportsman Series events from Weedsport Speedway, has moved to broadcast television for 2018 and will kick off the year at “The Port”.

The season-opening “Icebreaker 50” Big Block Modified event presented by WACK 1420 AM on May 20 will be the first event to air in June, followed by the historic Sportsman Classic presented by Industrial Tire of CNY and powered by Stirling Lubricants on July 3rd.
Hosted by veteran Central New York broadcast talents Rich Vleck, Doug Elkins and Paul Szmal, Speedway Showcase provides years of experience in broadcasting dirt track racing in front of the camera, but also behind it, with Weedsport Productions the driving force for all video content at Weedsport.

“Weedsport’s Speedway Showcase events help to show the region how great Weedsport is, both on and off the track,” stated Rich Vleck. “We are excited to have the ability to have two Weedsport events broadcasted in to just about every home in Western and Central New York in 2018.”

Tickets for all Weedsport Speedway events, including the season opening Ice Breaker 50 on Sunday, May 20, are now on sale through www.weedsportspeedway.com. Simply click on the orange “Tickets” tab on the top right-hand portion of the main page for more information.